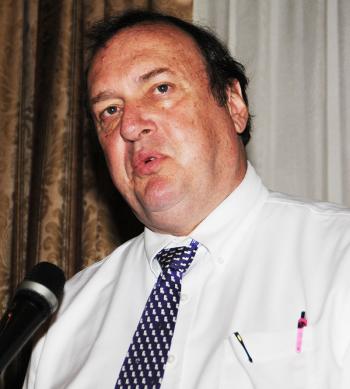 Randy Hayden, a spokesman for Louisiana's propane industry, speaks Monday in Morgan City about the proposed expansion of the Bayou Bridge Pipeline. (The Daily Review/Zachary Fitzgerald)

The past few years haven’t been good on the public relations front for oil and gas pipeline projects. With the expected expansion of a major pipeline through Louisiana, a propane industry spokesman says now is a critical time for pipeline proponents to win the battle of ideas.

Propane is produced by refining oil and natural gas, so that industry is concerned about getting oil and gas to refineries, Hayden said.
The Bayou Bridge Pipeline currently delivers crude oil from facilities in Nederland, Texas, to facilities and refineries in Lake Charles. Energy Transfer Partners is the main company involved in the pipeline expansion.

Eleven parishes will be directly affected by the pipeline, but St. Mary is not among them, Hayden said.

Years ago, a project such as this one would have been approved by the state departments of Environmental Quality and Natural Resources and U.S. Army Corps of Engineers “without any problems at all,” Hayden said.

But, now, things have changed.

Results of protests of the Keystone Pipeline and Dakota Access Pipeline in the past two years have “emboldened” protestors to continue their fight against oil and gas pipelines, Hayden said.

The Dakota “protest has been said to have reshaped the national conversation regarding pipelines and the Native American lands,” Hay-den said.
Protesters’ momentum has carried over to the Bayou Bridge Pipeline project. A few hundred protestors attended a public hearing in Baton Rouge for the Bayou Bridge Pipeline. The pipeline protestors are well-organized, well-funded, media-savvy and “passionate about what they do,” Hayden said.

The oil and gas industry has to do a better job of communicating its message to the public. Louisiana has thousands of miles of pipelines already in the state, Hayden said.

Using pipelines is the safest and most cost-effective way currently available to transport oil, Hayden said.

Environmental groups, such as the Louisiana Bucket Brigade, disagree with that statement and have voiced their strong opposition to expansion of the Bayou Bridge Pipeline.

Anne Rolfes, founding director of the Louisiana Bucket Brigade, said project leaders are “going to ram a pipeline through our Atchafalaya Basin just to export oil.”
Members of Rolfes’ group along with many others, who became educated by what has happened with the Dakota Access Pipeline, oppose the Bayou Bridge Pipeline.

A lot of the Bayou Bridge protestors “are really self-motivated to show up and pressure this state to pivot away from dirty projects like this,” Rolfes said.
Rolfes is concerned about the potential for pipeline accidents, and she said there have been 144 documented pipeline accidents in Louisiana in the past couple of years.

“We just think it’s really too dangerous to do,” Rolfes said.

Hayden says that federal rules require companies to report any pipeline leaks, no matter how small. As a result, hundreds of leaks have been reported, “but the substance and the amount and the danger of those leaks is insignificant,” Hayden said.

The pipeline is estimated to generate $17.6 million in sales taxes during construction and 2,500 construction jobs.

Crude oil from the St. James facilities will be transported to refineries located in the Baton Rouge area. The company says the pipeline will provide Gulf Coast refineries more efficient and sustainable access to North American crude oil and will help to diversify the supply of crude available.

“The fortunate thing for us is that we now have a president that is pro-pipeline,” Hayden said.

Rolfes also has concerns over the potential for pipelines to pollute drinking water sources.

“In the case of the Bayou Bridge Pipeline, they’re going through a number of drinking water sources, including Bayou Lafourche,” Rolfes said.

Energy Transfer Partners says the project “is committed to the safety of the community, workers and the environment during construction and operation of the pipeline.”

“Using advanced technology and a proven safety design, the project has added features that exceed federal requirements and will ensure the least impact to the environment and local communities along the route,” the company says.

The project’s permit from the Louisiana Department of Natural Resources is currently on hold until analysts finish getting additional information on questions raised during a public hearing, DNR Spokesman Patrick Courreges said.

The Corps of Engineers is working with the applicant to address agency and public comments received for one permit, and the public comment period on another Corps permit is set to end Thursday, Corps Spokesman Ricky Boyett said.

State Department of Environmental Quality personnel are also reviewing a project permit, but do not have an estimated date when they will make a decision on the permit, DEQ Spokeswoman Jean Kelly said.