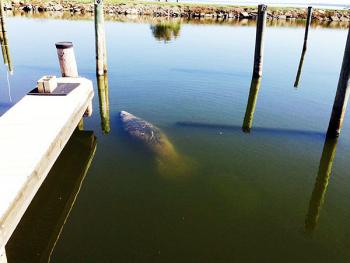 An unusual visitor was spotted Friday in Lake Palourde relaxing in the marina area of Lake End Park.
The visitor was a 5-foot long, roughly 330-pound manatee, said Toney Wade, lead investigator with the Louisiana Animal Cruelty Investigation Task Force. The manatee was on the small side for an adult. According to nationalgeographic.com, manatees typically range from 8 to 13 feet and weigh from 440 to 1,300 pounds.
Manatees are also known as “sea cows” and federally protected as an endangered species.
Wade received several calls from people concerned that somebody would hurt or harass the manatee. However, the task force hasn’t received any complaints of anyone actually harming the manatee, he said.
Wade thinks the manatee probably got into the lake through the Intracoastal Waterway.
Manatees are “highly adaptable animals” and can live comfortably in freshwater, saltwater or brackish water, he said.
“They’re just tough animals,” Wade said.
But they don’t do well in the cold.
Once the water temperature reaches 68 degrees, manatees will suffer from hypothermia, Wade said.
Wade expects the manatee to leave Lake Palourde on its own as soon as the water temperature drops below that threshold.
As shallow as Lake Palourde is and with the cool fronts coming through the area, it won’t be long before the manatee leaves the area, Wade said.
The manatee was seen hanging around by itself. Manatees normally travel in groups, so Wade believes there are likely other manatees somewhere in the area that haven’t been seen.
Manatee sightings in Louisiana are fairly common, but not in the Morgan City. They migrate to parts of Louisiana during the summer, Wade said.
One manatee population ranges along the North American east coast from Florida to Brazil. Other species inhabit the Amazon River and the west coast and rivers of Africa, the National Geographic website says.
Lake Pontchartrain gets a bunch of visits from manatees every year, Wade said.
Officials talked with biologists and determined that the manatee is “perfectly fine” and will leave on its own when it needs to, he said.
“Hopefully, it remembers where it came to and brings some friends next year,” Wade said.
“They seem to like our water lilies, so it could be a win-win.”