Pastors: Focus on giving during Lent 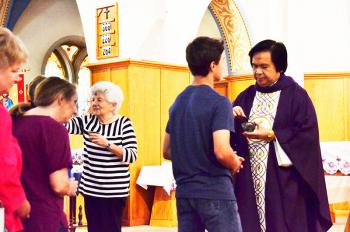 Lent is typically seen as a time for people to sacrifice by giving up something, but local pastors say helping others by adding something to one’s life is also crucial to the purpose of the 40-day season leading up to Easter.

Ash Wednesday ushered in Lenten season with services held in the area that featured the traditional imposition of ashes.

The Lenten season is a time to practice prayer, almsgiving, and fasting and abstinence, said the Rev. Freddie Decal of Sacred Heart Catholic Church in Morgan City.
Decal recently wrote an article about the Lenten season for Bayou Catholic Magazine.

As a priest, Decal has always promoted “Operation Rice Bowl,” which is an operation “to help feed hungry children in other parts of the world,” he said in the article.
People, especially children in the local community, are encouraged to set aside money during the time of fasting, Decal said. Then, during Holy Week, churches collect the money and send it to Catholic charities dedicated to feeding hungry children.

“We need to promote the value of generosity and solidarity with the poor at an early age,” Decal said.

Pharr Chapel United Methodist Church in Morgan City is among the local churches that held Ash Wednesday. The Rev. John Locascio encourages people to “give up something or maybe take on something” for Lent.

“It’s not just giving up. Sometimes, you might want to take on something that you really hadn’t thought about doing before,” Locascio said.

Focusing on doing something that’s “more life-giving to you and others” may be more worthwhile for some people than abstaining from something, Locascio said.

Fasting during Lent allows people to appreciate all they have and empathize with the less fortunate, Decal said.
The Catholic Church defines fasting as eating one full meal a day and two smaller meals, which if added together would not exceed the main meal in quantity.

“When we don’t eat, for even a little while, we get hungry,” Decal said. “When we get hungry, we develop a heightened sense of awareness of those who go hungry because of poverty. The experience of hunger can move us to do something in our little ways to help feed the hungry.”

The history of Lent goes back to the early church, when Lent was used as “a 40-day season for preparation for baptism” on Easter Sunday, Locascio said.

“Lent means kind of to turn around, realign your life, kind of focus on God,” Locascio said.

The season of Lent ends at sundown on Holy Saturday, the day before Easter.

Decal believes that whatever people “give up for Lent should involve sacrifice.”

Decal quoted Pope Francis saying, “I distrust a charity that costs nothing and does not hurt.”

“The Pope reminds us that our Lenten practices must truly enrich ourselves and others,” Decal said.