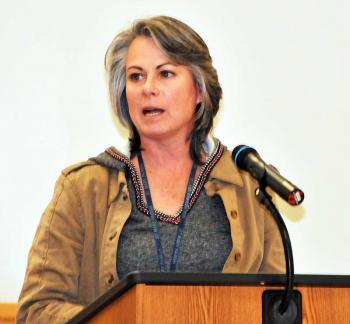 City leaders are appealing to state legislators for help in keeping black bears out of neighborhoods south of the railroad tracks.
Patterson has held several town hall meetings to explore what the city could do to address its black bear problems, Mayor Rodney Grogan said at Tuesday’s council meeting.
Grogan plans to hold another town hall meeting in early March, probably on Mike Drive, he said.
Since the town hall meetings, Grogan sent a letter to state Sen. Bret Allain, R-Franklin, and state Rep. Sam Jones, D-Franklin, to ask for help from the Legislature. Both legislators said they haven’t seen the letter yet but will look over it to see what they can do to help.
The safety of residents is a major concern for city officials because bears are roaming the community and appearing in residents’ yards before dusk on a daily basis, Grogan said in the letter.
New bear-proof cans and better garbage pickup have helped decrease some of the bear issues, Grogan said.
Grogan asked legislators to “expedite de-listing black bears or create a policy that will protect our citizens if they’re forced to protect themselves if threatened by the black bears.”
Police Chief Patrick LaSalle said he absolutely opposes hunting black bears.
Patterson police are working closely with the Louisiana Department of Wildlife and Fisheries to monitor the bear problems. Police are trying to patrol the area where black bears have been seen regularly but are shorthanded right now, LaSalle said.
Don Rodriguez, who lives south of the railroad tracks in Patterson, said bears have flipped his garbage can on its side and are “making the rounds” in the area.
“We need to find a way to control them,” Rodriguez said. Rodriguez is concerned that a child could wander outside and be attacked by a bear.
Catherine Siracusa, St. Mary Parish black bear conflict officer, said it’s high foraging time now for black bears. Usually August to December is the greatest foraging period, but the area hasn’t had consistently cold weather yet to deter bears from foraging.
People need to lock their garbage cans to keep bears from getting in the cans as at least 50 percent of residents with bear-proof cans aren’t locking them, she said. Cleaning cans is another way residents can keep bears away because bears can detect a smell up to five miles away.
Public Works Director Steve Bierhorst said the city may eventually start issuing citations to residents who don’t remove their cans from the road once their garbage is picked up.
In December, The Daily Review reported that officials were working to pass parish and local ordinances that would give teeth to a state law that prohibits the feeding of bears. The ordinance would clearly define “feeding” because state law doesn’t, Siracusa said.
Over the years, Wildlife and Fisheries has tried to relocate 53 bears from Patterson to other areas. Of those relocated bears, all but four of them returned to the Patterson area, Siracusa said.
There are about 150 bears in the area, Siracusa said. “The food source is what’s drawing the animals into our neighborhoods.”
Generations of bears have gotten used to having access to food in the Patterson area, she said.
A neighborhood watch program encouraging people to lock their cans could go a long way to help deter bears from visiting neighborhoods, Siracusa said.
Wildlife and Fisheries agents are trapping bears and Tasering them to discourage them from returning to the neighborhoods where they were caught, Siracusa said.
“It’s going to take a community effort,” Councilman Travis Darnell said. “It’s going to take an effort from the state, the federal government, and it’s a lot of red tape that we’re fighting.”
Also at Tuesday’s council meeting, Grogan said he met with the city’s auditor last week to discuss the financial report for the year ended June 30, 2015.
The city “did quite well” on its audit, but Grogan may have to call a special council meeting next week to have an executive session to discuss a couple audit findings relating to the city’s budget, he said.
In other business, the council:
—Introduced an ordinance to advertise surplus property for $22,500 located at the corner of Main and Morey streets.
—Approved holding the Martin Luther King Jr. Day Parade at 9:30 a.m. Jan. 18 at New Salem Baptist Church.
—Approved a Project Graduation can shake request to be held from 9 a.m. to 2 p.m. Saturday at Catherine and Main streets.