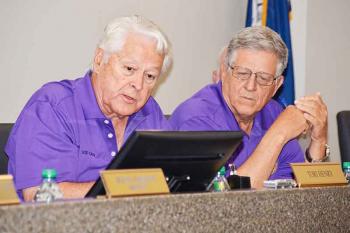 Port Commissioner Joe Cain speaks during Monday’s Morgan City Harbor and Terminal District Commission meeting. The commission approved hiring two consultants to help the port in its efforts to keep the Atchafalaya River Bar Channel adequately dredged to allow for commerce. At right, is Commissioner Gary Duhon. The commission formed a committee consisting of Cain, Duhon and Commissioner Ben Adams to meet with the consultants and report back to the full board. (The Daily Review/Zachary Fitzgerald)

At a time when the region’s economy is struggling, navigation issues on the waterways are only further stifling business. Port of Morgan City officials took steps Monday designed to start tackling the latter problem.

Port leaders are working with Louisiana’s congressional delegation to try to get more federal funding to be able to do another dredge demonstration in the Atchafalaya River Bar Channel. The demonstration would be aimed at determining a feasible way to keep the channel dredged to its authorized 20-foot depth year round, Port Executive Director Raymond “Mac” Wade said.

The channel begins roughly 20 miles south of Morgan City and empties into the Gulf of Mexico. Several feet of fluid mud, also known as fluff, builds up in the channel making navigation difficult or impossible for some vessels.

Having that adequate depth in the Bar Channel “would benefit everybody who’s on the river,” Wade said.

Shipyards would gain business at their dry docks that can’t get there right now, and import-export ships would be able to return to Morgan City, Wade said.
Import-export vessels made 20 trips to the Port of Morgan City between August 2014 and August 2015 but haven’t returned due to lack of water depth in the Bar Channel.

Commissioner Gary Duhon said port leaders have to move forward to find a way to keep the channel consistently at 20 feet to facilitate commerce through the Port of Morgan City.

Commission President Duane Lodrigue said businesses need the channel to be open “for the growth and sustainability of the area.”

“We know our goal, but don’t know how to get there,” Lodrigue said.

During the meeting, the commission approved spending up to $15,000 to hire Bean Consulting to explore the potential for the port to consider buying its own dredge to operate instead of using a rented dredge.

Commissioner Ben Adams was the lone vote against spending those funds, saying he wants to receive more notice and information on contracts before voting on them.

Additionally, the commission approved a contract with GIS Engineering to look for ways to keep the channel dredged, including the effects a potential long-distance sediment pipeline to Terrebonne Parish could have on the channel.

At the suggestion of Commissioner Joe Cain, the commission voted to form a committee consisting of Adams, Cain and Duhon to get advice from the consultants and report back to the full commission.

If the port is able to get its own dredge, the port could be eligible to get reimbursed by the U.S. Army Corps of Engineers for the cost of dredging, Wade said.
The Corps did its initial dredge demonstration in the Bar Channel in the summer of 2016, costing about $4.5 million. The port used a hopper dredge with a vacuum cleaner-type arm that sucked up sediment.

Officials expect a cutter-head dredge to arrive in the upper and lower Atchafalaya Bay by mid-March to remove sand from the bay at a cost of $5.5 million, which will use all of the port’s annually allotted dredging funds from the Corps for the fiscal year ending Sept. 30.

The spot to be dredged includes the same place where sand accumulated in 2016 after the winter high water.

Though the port plans to use all of the 2016-17 dredge funds on the bay dredging, the Corps is requesting that another demonstration be done in the Bar Channel during winter to see the effect of dredging at that time of year, Wade said. Results of the summer 2016 demonstration showed that the dredge was able to achieve the objective and keep the sediment in suspension while reducing the density of the fluid mud to its desired mark.

The summer demonstration was done at a time when conditions in the Bar Channel were at their worst as far as sediment buildup and wind direction, Wade said. That summer dredging cost $45,000 a day compared to the $110,000 a day it cost to dredge the Bar Chanel with a cutter-head dredge, he said.
Officials should be able to cut even more off the daily cost, Wade said.

Port officials are considering possibly signing a memorandum of understanding that could eventually allow for the establishment of trade between Cuba and the Port of Morgan City, Port Special Projects Coordinator Mike Knobloch said. But the trade potential would only be possible with an adequate channel depth.

In other business during Monday’s meeting, Adam Mayon was sworn in as a new commissioner, and the commission accepted a memorial resolution recognizing former Commission President Jerry Gauthier, who recently died.