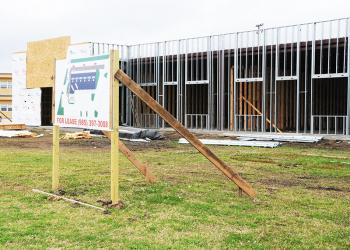 A CC’s Coffeehouse, Orange Leaf Frozen Yogurt and Verizon store, currently under construction at the corner of La. 70 and Elm Street in Morgan City, are among some of the new stores set to open soon in St. Mary Parish. Contractor Sidney Roy hopes the businesses will be open before May 1. The strip mall has room for a total of six tenants, but others haven’t yet been confirmed. (The Daily Review/Zachary Fitzgerald)

Parish officials collected $4.09 million in sales tax in January, a 2.8 percent drop from the $4.21 million collected in January 2016. Excluding collections from audits, collections decreased just 0.5 percent, according to the monthly report.

“I think that our economy has pretty well gone about as low as we can tolerate,” St. Mary Parish Sales and Use Tax Director Jeff LaGrange said. “It does look as though there is lots of optimism in the air for 2017.”

Some industries have begun to pick up work, while other industries have started importing goods and products into the parish for future projects. Another bright spot is that some new retail establishments are being built, he said.

“I certainly think that we will see some rebound soon, although I anticipate this to be a slow and steady progression,” LaGrange said.

In September 2016, the parish saw the first bright spot in sales tax collections in a long time after snapping a 22-month streak of continuously declining monthly collections compared to the same month of the prior year with a 7 percent increase that month, and 1 percent increase excluding collections from audits.

Carrie Stansbury, executive director of the Cajun Coast Visitors and Convention Bureau, said hotel stays in the area are starting to pick up a little as hotel customers’ business improves. The bureau promotes tourism in St. Mary Parish.

Parish Economic Development Director Frank Fink said in January that industry forecasters are predicting the price of oil will reach $60 to $65 per barrel by the end of 2017 because the world economy is expected to follow the U.S. economy’s pickup in activity, thus increasing demand for oil.

On the positive side, the unemployment rate has dropped from the 10.1 percent St. Mary Parish saw in June. However, the parish’s workforce, which is sum of employed residents and those looking for work, decreased from 24,086 in June to 21,325 in December.

Each quarter of 2016 saw a decline in parish sales tax collections.