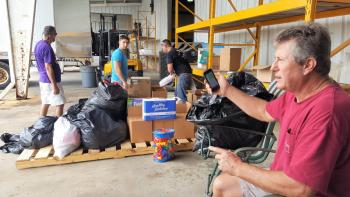 oey Carbonell owner of C-Tech Machine and Fabrication and Teche Trucking has put out a call for donations to help flood victims of what is being called the Great Flood of 2016.
Helping him with his quest is company representatives from G&J Land and Marine, Oceaneering, Teche Towing, and many others.
Area citizens have been dropping off donations all day Sunday and Carbonell's 18-wheeler will being making a trip to one of the area's affected by the ongoing disaster. Donations are still being accepted at C-Tech located at 3446 La. 182 in Berwick. Anyone wishing to donate cleaning supplies, personal hygiene products, food, clothing, baby food and diapers may bring them to C-Tech.
From left are Artie Myers, of Oceaneering; Mike Carbonell, C-Tech manager; Raymond Foret, of Teche Towing; and Joey Carbonell, owner of C-Tech and Teche Towing. (The Daily Review/Diane Miller Fears)

The Tri-City area escaped the weekend storms without street or home flooding, and area residents are pitching in to help get supplies to people in the Baton Rouge and Lafayette areas who were hit hard by flooding.
An observing station in the Patterson area reported 6.93 inches of rain from Friday through this morning, National Weather Service meteorologist Donald Jones said. Most of the rain fell Friday and Saturday, as the area got just 0.7 inches Sunday.
From Friday through Sun-day morning, the airport in New Iberia reported 18.82 inches of rain, and the station in downtown Baton Rouge reported 17.05 inches, Jones said. The Zachary area registered the highest amount of rainfall at 26.14 inches.
“We dodged one, I think,” Berwick Mayor Louis Ratcliff said.
The Berwick locks reported over 12 inches of rain during a 24- to 30-hour period from Friday to Saturday, but Berwick didn’t have any streets or homes flood, Ratcliff said.
“We never did get that short burst (of rain),” Ratcliff said.
Patterson Mayor Rodney Grogan said city workers cleared ditches Saturday that were “obstructed with some type of blockage.” As a result, Patterson also received no reports of flooding.
Morgan City Public Works Supervisor Jean Paul Bourg said the city’s drainage pumps worked well and kept water off the streets for the most part. Officials were able to maintain proper water levels in the drainage canals, even after the water rose a couple of times during the weekend.
The backup pump that workers installed Friday near the Port of Morgan City “really came in handy” to increase the pumping capacity at that pumping station, Bourg said.
St. Mary Parish Homeland Security Director Duval Arthur said other than one or two homes flooding in west St. Mary Parish, the parish stayed “high and dry.”
Local people worked throughout the weekend to collect supplies to bring to parishes affected by the floods, Arthur said.
“We had a lot of people thankful for the fact that we were spared. And they were offering help to others,” Arthur said.
Companies, including C-Tech, Pelican Contractors, Teche Towing, Teche Trucking, and Landry’s Mobile Home Movers, worked together Sunday to collect donations from people in the area and sent an 18-wheeler full of supplies to Central Middle School in the Baton Rouge area, said Leah Carbonell, co-owner of C-Tech, Teche Towing and Teche Trucking.
C-Tech Marine and Fabrication, located at 3446 La. 182 in Berwick, is still taking donations of items to help flood victims. The company will continue to accept donations and deliver the items collected as long as there is a need, Carbonell said.
They’re getting lots of do-nations of clothes, but they still need dry goods, feminine products, diapers, formula and denture maintenance products, Carbonell said.
Berwick Junior High is also collecting supplies to send to people affected by the flooding. Anyone wanting to donate can drop off items at the school’s front office through Tuesday.
Suggested items to donate include cleaning supplies, diapers, wipes, formula, bottles, sheets, blankets, pillows, new clothing and undergarments, nonperishable food items, toothbrushes, toothpaste, body wash, deodorant, laundry detergent, bug spray, garbage bags, First Aid supplies, gently used or new toys, color pencils, coloring books, socks and shoes.
Tiger Island Hardware is accepting items on behalf of several other organizations at the old Royal Eagle building, located at 7397 La. 182 in Morgan City.
Swiftships in Morgan City is accepting items that will be delivered to the Baton Rouge and Lafayette areas.
Those items include bottled water, diapers, toiletries, canned goods, dog and cat food, clothing in good condition, school uniforms, blankets and pillows.
Bring items to the Swiftships shipyard at 1105 Levee Road in Morgan City.
Workers will load a trailer to be delivered Wednesday to the Red Cross in Baton Rouge and Lafayette. All materials must be at the shipyard by 2:30 p.m. Wednesday to be loaded into a shipping container.
Additionally, Community Foundation of Acadiana is accepting contributions to its Acadiana Disaster Response Fund to help those affected by August’s historic rains and devastating floods. Donations may be made via a unique portal sponsored by Acadian Companies at www.cfacadiana.org/flood.