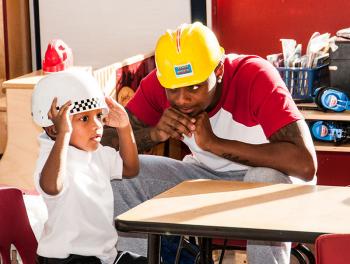 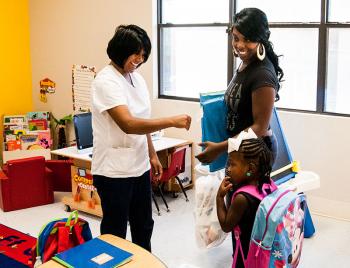 Baby Bear Head Start officially opened its door for students today after some last-minute repairs to the air conditioning unit.
Excited and uneasy parents watched their children begin their academic journey.
A few children cried, but the majority played cordially with their classmates.
But sounds of loud crying echoed from a classroom. “I want to take my baby home,” said Kristin Sanders, mother of Ajyria Polidore.
Today is Polidore’s first day at Head Start. She has spent a short amount of time in daycare, but most of her time has been spent with mom.
“I’m happy,” said Sanders. “It’s her first time in school, but she’s crying and it’s kind of overwhelming.”
Transitioning from home to school can be a daunting experience for children, but the Head Start staff is trained in social-emotional development for these new beginnings.
“I think it’s traumatic from all sides, both parents and children,” said Damita Hawkins, Baby Bear Head Start site manager.
“The first day of school is challenging because sometimes the children cry a lot,” said Vicky Burrell, Head Start teacher of 3- and 4-year-olds. “Not only do the children cry, (but) the parents cry, too.”
Teachers encourage the parents to “let go and let them grow” and “once the children settle down, they are going to be OK,” Burrell said.
“I never had to worry about my child,” said Doresa Bland, mother of Kaylee Coler, second-year Head Start student. “I knew she was in good hands. …
“Kaylee cried for a while when she first entered the Head Start program, but the staff took their time with her,” said Bland. “Now, she loves school.”
Student objectives for development and learning include physical, language, cognitive, literacy, mathematics, science and technology, social studies, art, and English language acquisition.
“I’m excited that he can learn more and interact with other kids,” said Jason Lewis, father of first-time student Jayden Lewis.
Jason Lewis is also a former Head Start student.
“Head Start is a good jumpstart for all kids,” said Laneisha Jones, Head Start lead teacher for 3-year-olds. “Both of my kids went to Head Start, now 8 and 5 years old. …
“I can say both of them did well and both of them were prepared for kindergarten,” said Jones. “My kindergartner is reading now.”
Before the start of school, Head Start conducts home visits to new students. This provides an opportunity for the staff to meet parents in a “relaxed environment.”
Home visits are a “really great tool because it helps us with the individualization of each child,” said Hawkins.
“Whatever necessary tools we need to put in place for children, we do. We encourage the parents with all that we have because sometimes it’s a tad bit more difficult for them than it is for the child,” said Hawkins.
Hawkins knows the Head Start process from many aspects. She was a Head Start student in New Orleans, later a parent of a Head Start student, a family service worker, and now a site manager.
“I’m finding with each passing day how I am able to utilize what had been given to me and how I utilize it with this position,” Hawkins said.
This story was written by Shea Drake. She can be reached at sdrake@daily-review.com.