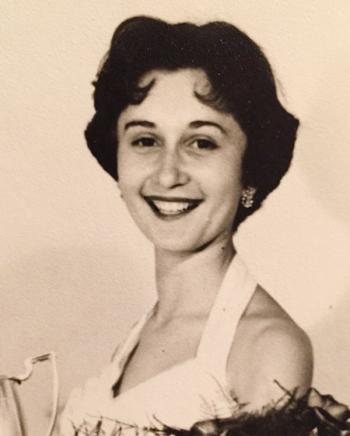 Anita Blanchard, 78, passed away on Monday, Feb. 16, 2015, surrounded by the love of her family.
She was known as Annichia Ann Adams, born to the late Alvin “Van” and Virginia Dimicelli Adams on Sept. 13, 1936, and was a lifetime resident of Morgan City.
In 1954 she graduated from Morgan City High School and later that same year was crowned “Miss Morgan City.” She attended and graduated from business college, focusing her study on bookkeeping.
Anita married her high school sweetheart, Terry Blanchard, who will miss her and lovingly remember their 60 years together. Her business background made her a successful part of their many family business ventures including “Terry’s Gulf” that they operated together for 30 years.
She was a loving, supportive mother to her three children who dearly loved her. Her pride and joy were her grandchildren and great-grandchildren and she deeply treasured every moment she could spend with them. She was an active member of the Catholic church and was devoted to the creation of a St. Joseph’s Altar every year until 2014. She enjoyed gardening and spending time with her close friends.
She was preceded in death by her parents; her sister, Ginger Keller; and her granddaughter, Aubrey Nicole Guidry.
Her survivors include her husband, Terry James; daughters, Terry Teresa Blanchard, and Cheri Guidry and husband, Gene; a son, Mark Blanchard and wife, Jennifer; two brothers, Robert Adams and Alvin Adams; nine grandchildren; and seven great-grandchildren.
The family wishes to extend their gratitude to Haydel Memorial Hospice for their loving support in her final days.
Visitation will take place at Twin City Funeral Home in Morgan City from 5 to 8 p.m. Wednesday, Feb. 18, 2015, with the rosary being prayed at 7 p.m. A Mass of Christian Burial will be held at 10 a.m. on Thursday, Feb. 19, 2015, at Sacred Heart Catholic Church with a visitation being held prior to Mass from 8 to 10 a.m.