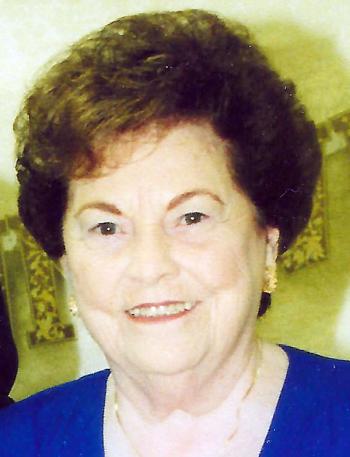 July 18, 1923 — July 17, 2014
Era Irene Aucoin Deslatte Mayfield, a longtime resident of Kenner and Morgan City, went home to her heavenly reward on July 17, 2014, surrounded by her loving family, at the age of almost 91.
A teacher for over 35 years, Era was a very outgoing lady and although she had no children of her own, she touched and molded the lives of countless students. Most of her students to this day still remark, “Mrs. Era was my favorite teacher.” Throughout her many years of teaching she taught at J.B. Maitland, John Curtis in New Orleans and Memorial Baptist.
Era was past president and officer of Gideons International. She was a member of First Baptist Kenner and attended Pharr Chapel in her later years and loved the Lord Jesus with all her heart and soul.
Era was also a world traveler and accomplished artist, leaving behind a vast array of paintings, needlework, and crafts that will be cherished by countless generations. Era enjoyed family and social gatherings and would always cook her favorite dishes. Everything she cooked was absolutely marvelous! A one-of-a-kind lady, Era will be sadly missed by all.
Era leaves behind to cherish her memory, her caregivers, Brenda and Carlo Gagliano of Bayou L’Ourse; three brothers, Eugene Aucoin of Chico, Cyrill Aucoin of Amelia, and August Aucoin and his wife, Ruby, of Gibson; one sister, Sylvania Verett of Amelia; she was a grandmother to Carlo Gagliano Jr., Faith Ann Estay, MiMi Hymel and Wendy Earon, Joseph, Catherin, and Irene Hild; godchildren, Douglas Aucoin, Clay Briehn and Judy Alfred; as well as many nieces, nephews and friends.
Era was preceded in death by her parents, Webster John and Evelyn Lacoste Aucoin; her first husband, the Rev. Joseph Deslatte; second husband, Bill Mayfield; brother, Albert Aucoin; three sisters-in-law and a brother-in-law; and two godchildren, Linda Verett and Robert “Bobby” Aucoin.
The family requests visitation by observed on Sunday, July 20, 2014, from 6 p.m. until 10 p.m. at Hargrave Funeral Home. Visitation will resume Monday, July 21, 2014, at Pharr Chapel from 8 a.m. until 11 a.m. Funeral services will be held at Pharr Chapel beginning at 11 a.m.
Era will be laid to rest in the Morgan City Cemetery.