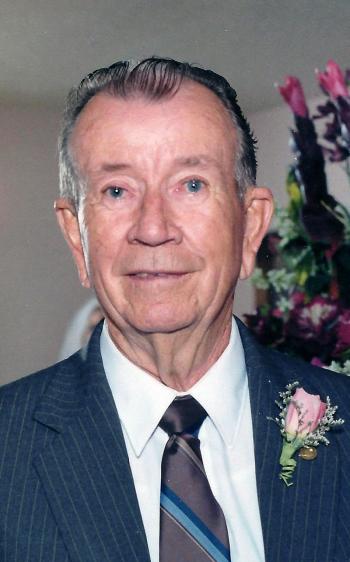 July 26, 1923-December 9, 2016
George William Kullman, 93, passed away Friday, Dec. 9, 2016, surrounded by his loving family.
George was born July 26, 1923, in Bayou Boutte, Louisiana, to Otto Adolph Kullman and Sena Mae Curtis Kullman. He was a lifetime resident of Morgan City, Louisiana.
George served in the U.S. Army during World War II. He worked for Kerr-McGee for 35 years as a mechanic. George was also a member of American Legion Post 96. After retiring, George enjoyed being with his family and will be deeply missed by all.
He was a loving and devoted husband, father, grandfather, great-grandfather, and great-great-grandfather.
George is survived by his five daughters, Spring White and husband Clark of Lafayette, Barbara Flowers of Morgan City, Dorothy Hernandez and husband Bob of Denham Springs, Margaret Battaglia of Thibodaux, and Patricia Bergeron and husband Tony of Gretna; a brother, Jimmy Kullman of Morgan City; and two sisters, Audrey King of Ponchatoula, Louisiana and Winnie Head of Ringgold, Georgia.
He was preceded in death by his wife, Marjorie Guillot Kullman; son, Michael Kullman; parents, Otto and Sena Kullman; brothers, Otto Kullman Jr., Paul Kullman and Charlie “Chink” Kullman.
The family would like to extend a special thank you to caregivers Brenda LaSalle, Jewelry Whetstone and Maricina Bardwell for the loving care and compassion that you each showed to Mr. George.
Visitation will be held Wednesday, Dec. 14, 2016, from 10 a.m. to noon at Holy Cross Catholic Church. Mass of Christian Burial will be held at noon on Wednesday, Dec. 14, 2016, at Holy Cross Catholic Church. Graveside services will be in the Morgan City Cemetery.
In lieu of flowers, please make a donation to a charity of your choice.