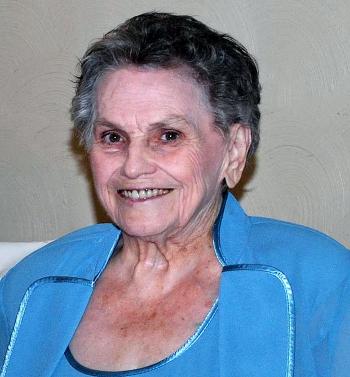 March 27, 1935 — April 2, 2014
Irene D. Scully, 79, of Morgan City, went home to her heavenly Father, who she served all the days of her life Wednesday, April 2, 2014, at Ochsner Medical Center in New Orleans.
Irene was born on March 27, 1935, in Morgan City, the daughter of Joseph Daigle and Blanche Aucoin Bourgeois of Napoleonville.
Irene was a loving wife, mother, grandmother, great-grandmother and sister. Her favorite saying to everyone was “Praise the Lord” and “Jesus loves you.” She will be remembered by all who knew her and that beautiful smile she showed to everyone she met. She never knew a stranger and she looked at everyone as the Lord’s child. Her heart was larger than life. She not only spoke the word of God, she lived it to the fullest. “For the Spirit of heaviness put on the garment of praise.” (From the book of Isaiah.)
She will be sadly missed and lovingly remembered by her son, Elwood Scully Jr. of Morgan City; one daughter, Carlette Holloway and husband, Sammy, of Morgan City; six grandchildren, Rosland Esclette, Shane Scully, Chad Bourgeois, Melissa Aucoin, Randy Prado Jr. and Paul LaCoste III; 17 great-grandchildren; and one sister, Margie Scully of Morgan City.
Irene was preceded in death by her parents, Joseph Daigle and Blanche Aucoin Bourgeois; husband, Elwood Scully Sr. of 54 years; one daughter, Cathy LaCoste; brothers, Willie Daigle, Alfred Daigle, Joseph (Joe) Daigle, Edward (E.J.) Daigle; and sisters, Edna D. Percle and Rose Mae D. Romero.
Funeral services will be held at 11 a.m. Saturday, April 5, 2014, at Twin City Funeral Home with Pastor Tommy Fromenthal and Brother Herb Stanley officiating. Visitation will be held from 9 a.m. until the time of the service Saturday at the funeral home. Irene will be laid to rest in the Morgan City Cemetery.