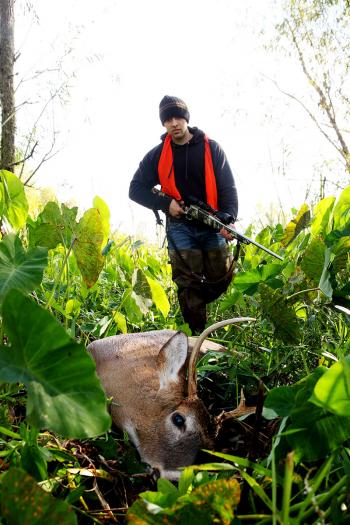 Joshua Flores, son of The Daily Review Outdoor Writer John K. Flores, walks up on a deer he recovered during his hunt. (Submitted Photo/Courtesy of John K. Flores)

Lewis Street, where my grandmother lived in the City of Flint, Michigan, during the late ’50s and early ’60s, was a typical middle-class neighborhood. Lewis Street ran parallel with the Flint River. On one side were houses and on the other side, the river.
Every Christmas holiday we’d go there.
I was pretty young then – single digits, in fact – but I have a vivid memory of those impressionable years. Grandma had one of those silver tinsel Christmas trees and the four-colored wheel that would change the color of the tree every few seconds. It was enchanting, and I would sit in my Uncle Earl’s easy chair not far from it and just stare at it for endless hours.
Next to Uncle Earl’s chair was a magazine rack and in it, volumes of hunting magazines. “Field and Stream,” “Outdoor Life,” “Sports Afield,” “Michigan Woods-n-Water” and a few others would be piled on top of one another.
Between tree-staring sessions, I’d pick those magazines up and read them, studying every page and absorbing every picture.
My grandmother would always cook a grand meal. During her younger days, she owned a restaurant in northern Michigan. And as a girl, her family lived off the land. She once told me the family’s grocery list consisted only of flour, sugar, lard and tobacco.
Life was much simpler then, with people making do through hardships such as the Great Depression and World War II when certain staples were rationed.
Besides ham or turkey, there was always deer meat for Christmas dinner. Though we lived in the city, one thing I didn’t realize then was how much the outdoors influenced the Miller side – my momma’s side – of the family.
My grandmother, during one of the few times I sat long enough to carry on a deeper conversation with her, told me about fishing for brook trout. She had one of those wicker fishing creels. When she caught a fish, she would immediately gut it and take a fern and place it inside the fish’s cavity to help keep it cool.
Michigan’s rifle deer season, as far back as I can remember and still today, begins Nov. 15 and ends Nov. 30. Most of the city dwellers in Flint, who worked the factories, would go “up north” to hunt deer. Interstate 75 would be wall-to-wall station wagons and pick-up trucks all the way to the Mackinaw Bridge, some 200 miles from Flint.
The 15-day rifle season is an event to this very day. Schools in most counties allow students three days of excused absence to hunt deer.
Earl was one of those who made the annual trek north then. All I know is, he must have been one heck of a hunter, because every Christmas there was venison on the table.
After Christine and I got married in 1984, we decided to live close to her family here in Louisiana. Christmas was a bit of a culture shock for a Michigan boy.
For one thing, I spent much of my first Christmas here dressed in a short-sleeve shirt. It was damp, balmy and near 80 degrees. I hated it weather-wise. This wasn’t Christmas weather to me.
The second thing was, I was away from my family, where our traditions were different.
Nearly everything we did during our first year of marriage for me was new and at times, even adventurous. This time, we were going down to my father-in-law’s trapping camp to celebrate Christmas.
So how do you cook a turkey or ham at the camp? How about stuffing? How about candied yams? How about pies – things that growing up in Michigan were constants and norms during my life, when it comes to holiday meals?
Christine and I have spent 32 Christmases together. One of the things that still amazes me is how many things can be cooked in a black-iron pot. When we got down to the camp, the tiny kitchen had a propane gas, four-burner stove and oven. And, Christine’s momma and daddy had something steaming from all of them.
One thing I learned over the years was, like my Uncle Earl, my father-in-law was one heck of a deer hunter, too. Every Christmas in Louisiana, my father-in-law pot roasted venison that surpassed my grandmother’s for flavor.
In retrospect, through the years I’ve been blessed to have spent Christmas in the northern reaches of Michigan’s snow country. I’ve shared a Christmas table with fellow airmen while in the service stationed in the southwest desert of Alamogordo, New Mexico. And, I’ve spent many in St. Mary Parish – sometimes in the marsh along some bayou.
The biggest constant at every table has been the fellowship and love shared among family and friends.
But, also venison. Merry Christmas…
EDITOR’S NOTE: Flores is the Daily Review’s Outdoor Writers. If you wish to make a comment or have an anecdote, recipe or story to share, you can contact Flores at 985-395-5586 or at gowiththeflo@cox.net or visit his Facebook page, gowiththeflo outdoors.