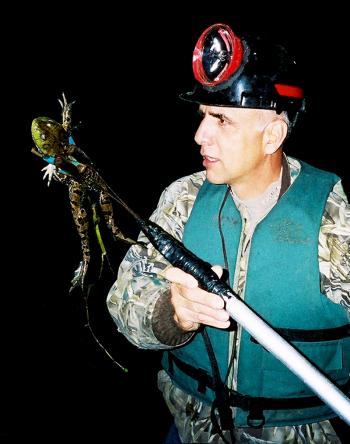 Deep in the Atchafalaya Basin, T-Kerm and Pierre lounged against the stems of some bull tongue along the sandy bank of Blue Point Chute near the Attakapas Wildlife Management Area.
Like so many nights before, the two frogs took in the tranquil setting, listening to choruses of bellows coming from their brethren, with the sound of insects chirping in raspy harmonies.
This had always been dinner music under the stars for the two frogs, who feasted on meals of crawfish and shadflies with damselfly nymphs for desert.
Suddenly, a flash of light came from the main river along the edge of a nearby sandbar.
Curious, T-Kerm said, “Pierre! What’s dat light out der? It looks like one of dose what-cha call first responders. But, dere’s no fire in da swamp. And, dat noise! Good-frog-almighty dats loud.”
“Naw – it ain’t no fire,” Pierre replied. “Da lass tom we had a fire, one of dem yahoos was burning some trash around his camp. Ole Gro-Pete cottontail came diving out of a brush pile wit his tail on fire – now dat was a site!”
“You don’t suppose it’s dem froggers, do you Pierre?” T-Kerm said with trepidation in his voice.
“Nawh – can’t be,” Pierre assured his partner. “Da lass tom they were dis deep in da basin, Meh, all you had to do was blink and dose young boys would pass you right by.”
T-Kerm laughed. Pierre always had a cocky way about him and a swagger the lady frogs liked.
T-Kerm’s laughter was short lived when he became serious, saying, “Yeah, but what about dat night dey invaded dat frog concert over by Willow Cove? Dey say some bullfrogs was puttin on one of dem ro-um-ro-um sing along shows and da pig frogs was blastin unk-unk as dey applauded when dem airboats hit dat place. Frogs went everywhere, bruh, and some wound up takin an airboat ride.”
“An airboat ride?” Pierre responded incredulously. “Now I know dey have some trouble wit dose surface drive boats, but an airboat?”
“An airboat,” T-Kerm recounted. “Da ones dat didn’t get out of dere just stood like statues starin at dat light. Da next ting you know, dey got grabbed wit a grabber.”
“A grabber you say,” Pierre replied, pondering such a contraption. He had heard of frogs getting grabbed by hunters using their hands but not with a contraption they called a grabber.
Large bullfrogs are strong and have been known to blow up and use their legs to power out of a person’s hand but not a grabber.
Amazed at the strength of one of his kind that could muscle out of a human’s grip, Pierre said, “A frog like dat must work out.”
“Oh yeah, dey work out,” T-Kerm said. “Some of dem frogs race up at dat Frog Festival in Rayne. It’s like an Olympics for frogs. You’d tink dey was Usain Bolt or some-ting. But, da ones dat don’t win – well – dey don’t call it a frog festival for nuting – no!”
Pierre disgustingly replied, “I can’t believe you say some-ting like dat T-Kerm!”
“Well, dem froggers in dem boats don’t chase us for our singin – no – Pierre; dats why I don’t eat too many of dem shadflies. All dat nutrition goes right to my thighs!” T-Kerm explained to his friend.
“How you gonna get away if you legs ain’t big?” Pierre shot back.
“I’m just tellin you, Pierre!” T-Kerm replied. “Mais, I’d rather be skinny den too big just in case I get caught one night – dey just might throw me back.”
“Mais, T-Kerm, you don’t tink mine are gettin too big, do you?” Pierre asked while looking down at his legs.
“Why you ax-in me dat?” T-Kerm smugly grinned. “You know what da ladies say about choo?
“No. What?” Pierre asked, hoping to hear a bit of flattery.
“That you thighs look like drum sticks,” T-Kerm said, bellowing out a ro-um-ro-um laugh!
The airboat drew closer. No longer was the bank along Blue Point Chute tranquil.
“T-Kerm, you were right,” Pierre reluctantly said. “Dose sealed beam sportin insomniacs are comin dis way.”
“What we gonna do, Pierre?” T-Kerm asked his friend.
“I tell you what I’m gonna do. I’m gonna hide in the mud and close my eyes – maybe dey’ll pass by me,” Pierre said.
Suddenly, the airboat rushed through the small chute behind the frogs. With lights working side to side, the froggers spotted T-Kerm, hunkered down and frozen still.
As the hunter was getting ready to make his grab, another boat with blue lights came from the opposite direction and pulled up alongside, forcing them to stop.
T-Kerm could hear one of the game wardens say, “Fellas, I was following you since you left the landing trying to catch up with you. I didn’t see any running lights on your boat. So, I’d like to see some identification and your fishing licenses if you have them.”
As his heart stopped racing, Pierre said, “Ehh – T-Kerm – Bro, dat was close, yeah!”
“Close,” T-Kerm exclaimed. “Dey almost grabbed me!”
“Mais – T-Kerm – I told you to close you eyes,” Pierre scolded his friend. “You got so scared your goggly eyes looked as big as two saucers.”
“You said it wasn’t dose froggers,” T-Kerm sternly replied. “Maybe nex tom you’ll listen to me.”
Author’s note: With warm nights, the latter part of March can be excellent for frog hunting. The winter has the grass flattened along bayou and canal banks opening up opportunities for some good catches. The season is closed during the months of April and May and reopens June 1.
If you wish to make a comment or have an anecdote, recipe or story you wish to share, you can contact John K. Flores at 985-395-5586 or gowiththeflo@cox.net or visit his Facebook page, Gowiththeflo Outdoors.