No shortage of outdoor stories in 2017 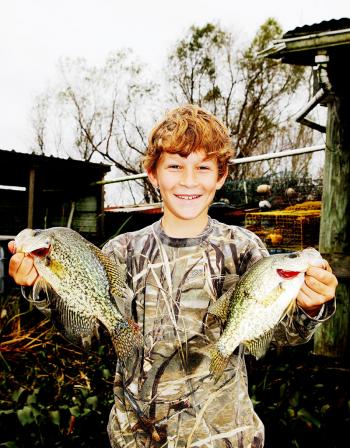 Benjamin Pontif with a couple of the sac-a-lait he caught at his family’s camp this past weekend. (Submitted Photo/Courtesy of John K. Flores)

There were plenty of things to write about in 2016.
One thing about the Sportsman’s Paradise, someone, somewhere, is always doing something in the outdoors. Based on the number of Thanksgiving, Christmas Day and New Year’s Day Facebook posts I read, waterfowl hunters didn’t give the birds a break. The fish, neither, for that matter, because there were just as many fishing reports noted as well.
There was a broad range of topics to talk about this past year.
Early in the year, I got to spend a few days banding blue-winged teal with Louisiana Department of Wildlife and Fisheries, learning about their ongoing efforts to detect potential avian viruses that could possibly enter the United States via these migrating birds.
On another trip, I spent time with Louisiana Department of Wildlife and Fisheries biologist Tyson Crouch, reporting on the Bayou Platte Water Bird Rookery Restoration Project on Marsh Island.
There was the latest Louisiana Department of Wildlife and Fisheries regulatory changes concerning Chronic Wasting Disease and what it meant to hunters bringing deer into the state that we reported.
And, there was a discussion on wearing personal floatation devices when boating fatalities reached the 20 mark for the second year in a row.
There were a couple of times I tried to keep everyone posted on the fishing conditions with what was biting. What’s more, believe you me, there was a couple of stretches this past year when the fishing was so good I felt guilty posting my own pictures online. NOT!
I’ve got to say, though, the best columns I enjoyed writing were the ones where I met someone and got to share a little bit about them — like Thonis Buteaux. This past spring, my wife and I were on a pretty good bream bite, when Thonis came up to us in Flat Lake and introduced himself.
I always learn something when I talk with fellows like Buteaux. The 73 year old Patterson resident was full of information.
It was also neat reporting how our local favorite BASSMASTER pro, Cliff Crochet – Cajun Baby – came roaring back from 27th place to win the Bass Pro Shops Central Open in the Atchafalaya Basin. The Pierre Part native will be fishing the 2017 Geico BASSMASTER CLASSIC on Lake Conroe, Texas, March 24-26.
As 2016 was coming to a close, the stories kept coming. Take the call I got a couple weeks back from Eric Frent. He saw where I always ask at the end of my column if someone has a comment they wish to make to give me a call.
Well, Eric shared a story about how his 12 year old nephew, Hunter Davis, killed a big old 10 point buck while dog hunting in the Atchafalaya Basin just weeks before Christmas.
In a follow up call and email exchange with Hunter’s mom, Amy Davis, come to find out the young man is a pretty seasoned outdoorsman for being only 12.
The Morgan City youngster started hunting and fishing at the age of four with his father and grandfather. According to his mom, he watched and learned and even when it was cold and raining, never let the elements bother him.
The past couple of years, Hunter has really come into his own, his mom says, having harvested squirrels, wood ducks, doe deer, a hog, and now his big 10 point, plus a 4 point the following weekend.
On the last day of 2016, I met 10-year-old Benjamin Pontif. Ben was hunting ducks with his father, Steven, and older brother, Alex.
It was Pontif who struck up a conversation with me when we drove up in our boat to the dock where his camp was moored.
The affable Pontif said, “How’d y’all do?”
To which I answered, “Pretty good, we got eight ducks this morning.”
“Y’all did better than we did. We only got three,” he replied.
That’s when we got to know each other, following introductions. He let me know he was a fifth grader at Mulberry Elementary School in Houma and much rather be at the camp hunting and fishing than in school.
I immediately got that — one hunter to another — of course. There’s many days I’d prefer being somewhere outdoors than at my day job. Such is life. But, what was really special about Benjamin was his kindheartedness.
As it turned out, he is a heck of a sac-a-lait fishermen – note: something I’m not – and he caught quite a few fish during the holiday week. He commenced to show me six that he caught and kept in a live well the evening before.
What’s more, asked me if I wanted a mess of fish to take home since he had already caught plenty.
What can I say? I took him up on it and made a friend for life.
I don’t know what 2017 holds in store for stories to write about. But, I do know one thing: there is no shortage of them. Someone, somewhere, is always doing something in the Sportsman’s Paradise.
Happy New Year…
EDITOR’S NOTE: Flores is The Daily Review’s Outdoor Writer. If you wish to make a comment or have an anecdote, recipe or story you wish to share, you can contact Flores by at 985-395-5586 or at gowiththeflo@cox.net or on his Facebook page, gowiththeflo outdoors.