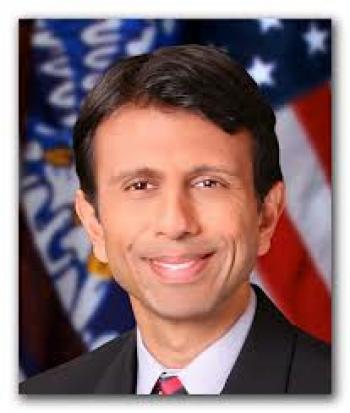 BATON ROUGE, La. (AP) — Gov. Bobby Jindal planned to file a lawsuit Wednesday against the Obama administration, accusing it of illegally manipulating federal grant money and regulations to force states to adopt the Common Core education standards.
The U.S. Department of Education has used a $4.3 billion grant program and federal policy waivers to encourage states to adopt uniform education standards and testing. The Republican governor says that "effectively forces states down a path toward a national curriculum" in violation of the state sovereignty clause in the Constitution and federal laws that prohibit national control of education content.
A draft copy of the lawsuit was provided to The Associated Press by the governor's office. Jindal planned to file it Wednesday in the federal court based in Baton Rouge.
The legal challenge puts Jindal, who is considering a 2016 presidential bid, at the forefront of a dispute between conservatives and President Barack Obama, bolstering the governor's profile on the issue as he's trying to court conservative voters nationwide.
"The federal government has hijacked and destroyed the Common Core initiative," Jindal said in a statement. "Common Core is the latest effort by big government disciples to strip away state rights and put Washington, D.C., in control of everything."
The Common Core standards are math and English benchmarks describing what students should know after completing each grade. They were developed by states to allow comparison of students' performance. More than 40 states, including Louisiana, have adopted them.
When the state education board adopted the standards in 2010, Jindal supported them, saying they would help students to better prepare for college and careers. He reversed course earlier this year, however, and now says he opposes the standards because they are an effort by the Obama administration to meddle in state education policy.
The governor's change of heart is not shared by lawmakers, the state education board and his hand-picked education superintendent, all of whom refuse to jettison Common Core from Louisiana's classrooms. Jindal tried to derail use of the standards by suspending testing contracts, but a state judge lifted that suspension, calling the governor's actions harmful to parents, teachers and students.
Turning to federal court represents a new tactic in Jindal's efforts to undermine Louisiana's use of the standards.
U.S. Education Secretary Arne Duncan has criticized the governor's opposition to Common Core as politically driven. In a June interview with "CBS This Morning," the secretary said of Jindal's switched position: "It's about politics, it's not about education."
The Obama administration embraced the standards and encouraged states to adopt them as part of the application process for the Race to the Top grant program. Two state testing consortia — the Partnership for Assessment of Readiness for College and Careers, or PARCC, and the Smarter Balanced Assessment Consortium — received $330 million from the grant program to develop standardized testing material tied to Common Core.
"Louisiana now finds itself trapped in a federal scheme to nationalize curriculum," the lawsuit says. "What started as good state intentions has materialized into the federalization of education policy through federal economic incentives and duress."
Louisiana received more than $17 million from Race to the Top and joined the PARCC consortium. It also received a waiver from certain federal education requirements under a program enacted by the Obama administration in 2011 that Jindal's lawsuit says was designed to coerce states to use Common Core or risk the loss of billions in federal education funding.
The lawsuit will seek a judge to declare the Department of Education's actions unconstitutional and to keep it from disqualifying states from receiving Race to the Top funds based on a refusal to use Common Core or to participate in one of the testing consortia.