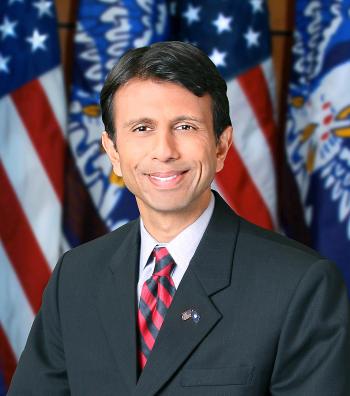 BATON ROUGE (AP) — Gov. Bobby Jindal has been too vague in his position about Louisiana’s use of the toughened education standards known as Common Core, a nonpartisan organization that supports the standards said Thursday.
Jindal has described having “concerns” with Common Core and its associated testing, while also saying he supports high academic standards. But he hasn’t directly said whether he supports the efforts of lawmakers seeking to tweak the standards or scrap them entirely.
“It would be helpful to know specifically what those concerns are,” the Council for A Better Louisiana said in a statement released by its president, Barry Erwin.
“Unfortunately, not knowing has opened the door to legislators introducing a wide array of bills that would gut the standards, delay their implementation and require us to develop new standards and new tests at a cost of tens of millions of dollars to the state,” the statement said.
Jindal refused again Thursday to be pinned down on an issue that has become among the most contentious debates of the legislative session.
In a sit-down with reporters, the Republican governor dodged questions of whether the state should shelve Common Core or maintain it with adjustments. He wouldn’t say whether the state should continue plans to use multi-state testing or develop a state-specific testing system.
Instead, he said he’ll take a position when each legislative proposal comes up for debate.
“When it comes to specific bills, when they get to the issue of standards, we’ll sit down with the authors and provide our thoughts about it. But in general when it comes to standards, we don’t want to weaken the standards,” Jindal said.
Louisiana’s education board agreed more than three years ago to phase into public schools the grade-by-grade benchmarks of what students should learn in reading, writing and math. The Common Core standards have been adopted in most states, as a way to compare states’ performance and add more rigorous training for students.
Use of the standards divides Republicans, with tea party supporters criticizing them as a shift to a nationalized education system. The central bills seeking to roll-back Louisiana’s use of Common Core are sponsored by GOP lawmakers.
“I do think folks have a right to be concerned about a federal overreach in education,” Jindal said.
He said he’s concerned Common Core and its associated testing use a “one-size-fits-all” approach an don’t have adequate protections for student privacy. But he also wouldn’t say if those concerns can be addressed while still preserving Common Core in Louisiana.
A day earlier, the Jindal administration announced its support of a bill by Rep. John Schroder, R-Covington, that would limit how Louisiana can store and share public school student data.
But the bill stalled in committee as lawmakers tried to reach a compromise with state agencies who say they need some access to data to process financial aid requests and receive billions of dollars in federal education assistance.
Jindal said he was confident an agreement could be reached.