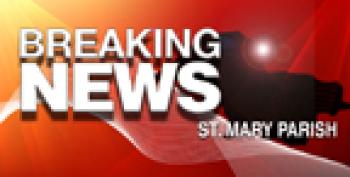 Missing money prompts
new state standards
HOUMA — Jacques Berry, spokesman for the lieutenant governor’s office, says misplaced money at the Houma Regional Arts Council has led to new accountability standards for arts councils across the state.
About $40,000 of state money administered by the Houma Regional Arts Council to support the arts was reported missing last month instead of being sent to local arts groups. State officials said they are not sure where it was spent and are investigating.
Berry said arts councils across the state will now have to produce proof that money has cleared their accounts for all grant payments.
Previously, Berry says each arts council had to submit one report a year.

Hospitals tackling obesity
BATON ROUGE — Sixty-six Louisiana hospitals have signed onto a statewide weight loss competition over the next six months to try to put a dent in Louisiana’s problem with obesity, by some measures the worst in the nation.
The Louisiana Hospital Association organized the Geaux Lite Challenge.
The participating hospitals are forming teams made up of staff, family members, individuals and community partners who will compete to lose weight and get healthy.
Winning teams and individuals will win awards.
Department of Health and Hospitals Secretary Kathy Kliebert said the Geaux Lite Challenge sends the message that we care about the health of our healthcare workers too.

Recreational harvest
of gray triggerfish to close
BATON ROUGE — State wildlife and fisheries officials say the recreational fishing for gray triggerfish will close in Louisiana waters about two weeks.
The Louisiana Department of Wildlife and Fisheries said Wednesday that experts have determined that the recreational quota of 217,000 pounds was met and the closure is necessary to prevent further overfishing.
The state season closes at 12:01 a.m. Oct. 15. Federal waters will also close on that day.

Edgen Group being acquired by Japan-based Sumitomo
BATON ROUGE — Japan-based Sumitomo Corp. and Sumitomo Corp. of America Inc. will acquire Baton Rouge-based specialty pipemaker Edgen Group Inc. in a deal valued at $520 million.
Sumitomo said it will acquire all of Edgen’s stock at $12 per share. The deal is expected to close by the end of the year.
With the assumption of Egen’s debt included, the deal is worth $1.2 billion.
The deal allows Sumitomo to expand its distribution through every part of the oil and gas market, from exploration and production to refining and pipelines, said Kazuhiro Takeuchi, president and chief executive officer of Sumitomo Corp. of America.
Edgen President and Chief Executive Officer Dan O’Leary will continue to lead Edgen’s strategic growth initiatives.
Edgen has 660 employees in more than 35 locations in 18 countries.
Edgen Group has two commercial brands: Edgen Murray and Bourland & Leverich. Edgen Murray is a global distributor of specialized steel products in offshore drilling and production; the gathering, processing, transportation and storage of oil and natural gas; and refining and petrochemical business.
Bourland & Leverich is a U.S. domestic oil country tubular goods distributor, which has been in business since 1935.

Council: Sign up for
garbage service, or face fine
LAFAYETTE — Lafayette residents who have not signed up for mandatory garbage service and those who leave their trash cans at the road for too long now face fines.
The City-Parish Council voted 8-1 on Tuesday to retool local laws regulating waste management in the parish, putting teeth into requirements that residents sign up for garbage service and they pull trash cans away from the road within 24 hours after trash has been picked up.
Allied Waste has the contract for trash service in Lafayette Parish, and the fee is automatically added on the utility bills for city residents.
The requirements have long been in effect, but the only way to enforce either one was for city-parish government to file a lawsuit against the property owner.

Lafayette board approves bonus check for workers
LAFAYETTE — The Lafayette Parish School board approved bonus paychecks for the majority of its employees, including about 2,400 teachers.
Teachers and other eligible employees, such as counselors and librarians, will receive about $2,200 later this month.
The money to pay the bonuses comes from $7 million in reserves available for distribution from a 2002 half-cent sales tax dedicated to teacher pay and support.
The half-cent sales tax generated a total of about $26 million with $7 million remaining after the dedicated funding was spent.

Jefferson deputy charged with beating jail inmate
NEW ORLEANS — A Jefferson Parish sheriff’s deputy has been charged in federal court in the beating last year of an inmate.
Gary Shine, a sergeant who has worked in the parish jail for nearly a decade, was charged in a bill of information this week with depriving an inmate identified only as “D.R.” of his rights.
According to the bill, Shine used excessive force when he kneed the handcuffed inmate and punched him in the head on Oct. 21, 2012.
Col. John Fortunato, of the Jefferson Parish Sheriff’s Office, said Wednesday that Shine has been reassigned to desk duty.
Shine joined the Sheriff’s Office in 2003.

‘Steel Magnolias’ home up for auction in Natchitoches
NATCHITOCHES — A piece of Hollywood history will be sold on the auction block this month.
Natchitoches’ Cook-Taylor House — made famous in the film “Steel Magnolias” — will be auctioned Oct. 26 to the highest bidder.
The house was built in 1840 by Italian architects Trizini and Soldini and was purchased as a business by Louis Dupleix in what early Natchitoches historian J.H. Cosgrove referred to as a great business spot. During the Civil War, the home was used for a hospital and it is rumored to have played a part in the Underground Railroad.
The home has about 5,900-square-feet of living space, six bedrooms, six bathrooms and an 800-square-foot guesthouse.
Other features include circular brick columns along the facade of the home, the original wood floors and a grand staircase.
In 2003, Karen and Paul Rinehart purchased the home and transformed it into the Steel Magnolia House Bed and Breakfast. Christina Landry, the current owner, planned to convert the house back into a residence, but continued to run it as a bed & breakfast when she found she really enjoyed meeting the guests.
“It’s been a truly wonderful experience being part of this home’s amazing history and wonderful community,” Landry said “If it weren’t for the fact that we want to be closer to out-of-state grandchildren, we certainly would have lived in Natchitoches and this architectural masterpiece for years to come!”
The auction will be held at 10 a.m. on site at 320 Jefferson Street in Natchitoches. It also will feature antiques, high-end furnishings, movie memorabilia and other items.
“This auction is truly a once-in-a-lifetime opportunity,” said Barbara Bonnette, auctioneer and agent with United Country — Bonnette Auctions Louisiana Outdoor Properties. “The Cook-Taylor House is one of the most valuable and desirable properties in Natchitoches parish. Properties such as these don’t become available every day.”
For auction and inventory details, photos and terms and conditions, visit www.BonnetteAuctions.com. The auction team can be con-tacted directly at (318) 443-6614.