Much to see before, during and after Eagle Expo 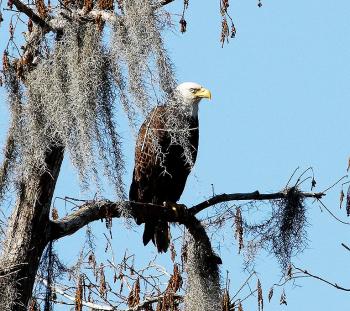 Attendees are sure to see plenty of bald eagles at the 12th Annual Eagle Expo this weekend. (Submitted Photo/Courtesy of John K. Flores)

The old idiom, “time flies,” became quite apparent this week when the dates of February 16-18 were circled and noted with 12th Annual Eagle Expo. What’s more, this year’s Expo is sure to once again be a day to remember for those who attend.
One thing that stood out to me while looking over this year’s schedule is the Saturday morning list of speakers following breakfast at the Petroleum Club of Morgan City. Michael Seymour, Louisiana Department of Wildlife and Fisheries Natural Heritage Program Non-Game ornithologist starts the morning off with a presentation on “The Status of Louisiana’s Bald Eagle.”
I’ve attended mist net demonstrations Seymour has conducted in the Atchafalaya Basin and on Grand Isle. Seymour is knowledgeable and informative.
I don’t know much about Maggie McPherson, other than that she is on the list. However, I kind of liked what her discussion will be about that’s titled, “Heat Wave or Green Wave: How will migrants track seasonal resources in a changing climate.”
No matter what your take is on climate change, there is something to it. To me, birds are those conspicuous creatures that can tell you something about the health of our environment.
McPherson will be followed by Cathy DiSalvo, who is a member of the Louisiana Ornithological Society. DiSalvo will talk about, “Bird’s and how to attract them to your garden.”
One thing Mrs. Flores and I have done – she mostly – is create an environment that is bird friendly in our backyard. A number of years ago, after a trip to the Sabine National Wildlife Refuge during the spring migration, we took a hint from there and planted a red mulberry tree.
During the spring neotropic songbird migration that peaks around the third week of April, the birds land along our coast to get tanked up on food sources to continue their northerly trek. We noticed the refuge planted dozens of them that were filled with rose-breasted grosbeaks, scarlet tanagers, summer tanagers, orchard orioles and other songbirds.
Last spring, we counted 29 different species of birds that came to dine with us. While the birds filled up on red mulberries, we sat quietly eating our own breakfast on the patio enjoying the spectacle. No doubt, attendees are going to pick up some great tips from DiSalvo.
The Eagle Expo annually is almost a gauge for me to begin looking to the skies around St. Mary Parish because the date is typically late February.
Within days of the event, the purple martins start showing up. And, usually a few weeks later, the early migrating song birds are starting to show up, too.
Speaking of early migrants, Darlene Chauvin of Centerville, on Feb. 4, posted a painted bunting on her Facebook page. That seemed way too early for me, so I did what any amateur birder would do: investigate.
According to George H. Lowery Jr., author of “Louisiana Birds,” the painted bunting only is occasionally seen at this time of year. My 3rd Edition was printed in 1981 and says only 17 records on file cover the months of December, January and February. Chauvin’s bunting is a real early bird.
By the end of March, the prothonotary warblers can be heard singing in the Atchafalaya Basin, along with the swirling-zee sounds of the northern parula and “peter-peter-peter” call of the tufted titmouse.
One of the boat tours during this year’s Expo includes the Bayou Teche National Wildlife Refuge. I’m not so sure how many eagles will be seen on that particular tour. But, this I can tell you: St. Mary Parish is lucky to have this refuge in our backyard.
I spend hours upon hours on this refuge from March through late June observing wildlife in its natural habitat, for the most part undisturbed. Hunting is allowed during the fall. But, for a birding destination, it’s as good as any forested wetland in the United States.
If wildlife viewing is something you’re interested in, a canoe or kayak trip into this 9,028-acre playground early in the morning won’t leave you disappointed. One magnificent bird that I have seen numerous times is the swallow-tailed kite. A bald eagle is awesome and majestic, but a swallow-tailed kite is like the phantom of the tree tops. It’s almost a spiritual thing when you see it glide through the cypress and tupelo trees.
Speaking of time, there is still time to sign up for a few remaining tours if you act right away. The 12th Annual Eagle Expo runs through Saturday afternoon. For more information, call 800-256-2931 or 985-380-8224 or visit www.cajuncoast.com
EDITOR’S NOTE: Flores is The Daily Review’s Outdoor Writer. If you wish to make a comment or have an anecdote, recipe or story you wish to share, you can contact Flores at 985-395-5586 or at gowiththeflo@cox.net or visit his Facebook page, “gowiththeflo-outdoors.”