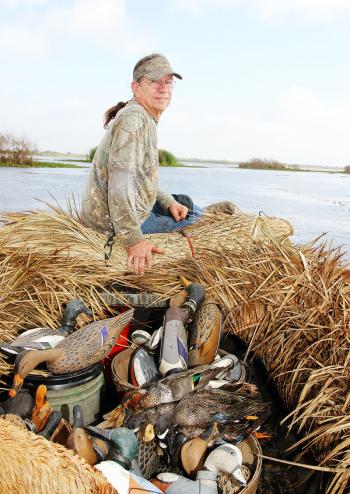 On a near dead-calm, damp, sort of sticky morning this winter I sat in a duck blind between Cal Kingsmill and Mike Benge waiting. Waiting for something to happen. Waiting for some ducks or “a” duck to strafe our position. I had come to the Delacroix Corporation marsh with Cal for one reason, to actually hunt over the authentic hand carved wooden decoys he’s renowned for.
Benge, Delacroix’s President and CEO and a close friend of Kingsmill, was extremely kind and generous not only to guide us, but also put us up for a couple nights at his camp.
Benge, happens to also be a past Ducks Unlimited State Chairman and currently DU State Campaign Co-Chairman. He owns a number of Kingsmill’s working decoys. What’s more, Kingsmill has donated numerous decoys to the DU cause garnering literally 10s of thousands of dollars in donations for the organization.
Our chance came when seemingly out of nowhere a group of several blue winged teal and a pair of northern shoveler spoonies flew over us from behind the blind. By the time we reacted they were already passing over the outer edge of our decoys.
It’s always like that in the marsh when nothing is happening. Your guard is down. Your mind is drifting somewhere else in the light conversation and your reflexes are seemingly on pause.
Suddenly, perhaps 100 yards away their wings tilted causing them to turn like valence electrons on the outer ring of an atom. Their energy slung them on a collision course with the decoy spread.
Just outside of Kingsmill’s wooden blocks their wings went into reverse thrust and their feet came down like landing gear. I’m not sure why, but none of us fired a shot at the ducks.
Maybe it was because we didn’t know one another that well, so it was more a gentleman thing. Maybe it was the beauty of their winter plumage, where the arc of their colors in motion mesmerized us. Whatever it was, the birds lit among the decoys, that’s when Benge ordered us to stand up and shoot. After all, in retrospect that was a second reason we came.
The ducks rose off the water and we fired.
While Benge’s dog Sarabi went to work retrieving three birds I asked Kingsmill, “What are you thinking when you look out over these decoys, where the dog is on a retrieve, and it all just came together?”
Kingsmill smiled and replied, “Well, it adds an extra dimension to the hunt I think. The good part about making your own decoys is you’re actually watching them work in the water, watching the wind blow them, and looking at how they float. You get to see how different species of ducks react to them. It’s a thrill really to know that you made something with your own hands and the ducks are responding to it.”
Kingsmill, 68, started hunting ducks with his father in the Biloxi marsh near New Orleans at the age of 8. If you ask him is he a duck hunter first or a carver first, he’ll mention both actually.
His early carving influences came from Gentilly neighbors Charles Joefrau, Mitchell LaFrance, and George Fredericks, where he grew up. Kingsmill’s father was friends with all three men and father and son would actually hunt over their decoys.
Kingsmill tells the story how his father owned a gas station on the corner of Bruxelles and Duels Streets back in the 40s and 50s, near the city park in New Orleans. LaFrance, Joefrau and Fredericks would go fishing in the park and walk right past the station on their way.
At some point one of the three friends bought a car and would pull into the service station with poles hanging out the windows to buy gas.
Kingsmill said, “It got to where my father started swapping gas for decoys every time they came in. And, those decoys were the ones we actually hunted with and I still have in my possession. We hunted with them until Charles Frank Jr., came out with his book ‘Louisiana Duck Decoys.’ That’s when we figured they might be really valuable so kind of laid them up.”
Kingsmill doesn’t only carve ducks. He also has carved geese, majestic swans and even egrets and herons, where the latter have been utilized as confidence decoys in marsh, to add realism in decoy spreads.
Once while duck hunting with a friend he placed one of his hand-carved egrets out near the spread to add to a little spice to his ruse. He was about to retrieve a duck they had just shot when an egret, which is also a fairly wary wading bird, came sweeping by. The live egret grabbed Kingsmill’s egret decoy tackling it to the ground and began pecking it. In short, though Kingsmill does not carve decorative decoys, his working decoys are life-like and resemble the real thing.
Over the years, Kingsmill says the finger tips on both of his hands have lost feeling from the constant sanding he does every day. But, in spite of the lack of feeling there’s no stopping Kingsmill. It’s a labor of love and passion for him.
He’s still one of only a few carvers remaining who actually still hunt over their handmade decoys. A benefit, according to Kingsmill, which places wear on them that collectors want to see and are willing to pay for.
The two mornings I spent with Kingsmill and Benge hunting over the wooden decoys we limited, while others back at the camp didn’t. Was it the look of our spread? I don’t know. But, I’ll let you decide.
EDITOR's NOTE: Flores is The Daily Review's Outdoor Writer. If you wish to make a comment or have an anecdote, recipe or story you wish to share you can contact John K. Flores by calling 985-395-5586 or by email at gowiththeflo@cox.net or go to his Facebook page Gowiththeflo Outdoors.