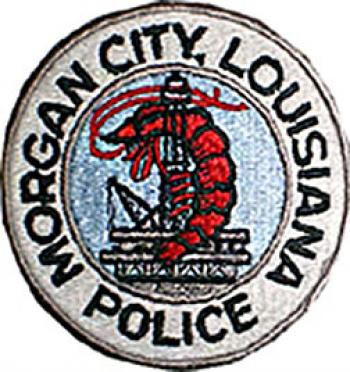 Two men were arrested by Morgan City Police Thursday, and each man was accused of stealing more than $30,000 from their employer by fabricating time cards in a theft that originated in Ascension Parish, according to a Morgan City Police news release.
—Terrance K. Lindon, 26, of Rayne, was arrested at 9:46 a.m. Thursday on an Ascension Parish warrant charging him with felony theft.
—Martin J. Locks, 36, of New Iberia, was arrested at 9:46 a.m. Thursday on an Ascension Parish warrant charging him with felony theft.
On Tuesday, Morgan City Police detectives began an investigation of a theft by fraud from Fab-Con Inc. on Youngs Road in Morgan City. Two employees of the company are alleged to have fabricated documents in an effort to obtain pay, police said. During the investigation, investigators determined that the theft originated in Ascension Parish, police said.
The two employees were turning in fake time cards and each was accused of $30,400 in theft, Morgan City Police Spokesman Capt. James Blair said. The theft began in February and occurred over a three-month period, Blair said.
Ascension Parish authorities were contacted, who, as a result of their investigation, obtained arrest warrants for the suspects. Locks and Lindon were located at the Youngs Road company, police said.
They were arrested and transported to the Morgan City Police Department where they were booked and awaiting transport to Ascension Parish.
Morgan City Police reported the following arrests:
—Shane E. Richard, 20, of Filmore Street in Morgan City, was arrested at 9:13 a.m. Thursday on the charge of possession of drug paraphernalia.
Officers were dispatched to a Filmore Street residence to investigate a narcotics complaint. During the investigation they came in contact with a suspect, Richard. In the process, investigators located items determined to be drug paraphernalia. Officers uncovered evidence that the items belonged to Richard. He was jailed.
—Anthony P. Ruffin, 36, of Patterson, was arrested at 9:26 a.m. Thursday on a warrant charging him with aggravated burglary.
Ruffin was located at the Terrebonne Parish Correctional Facility and transported to the Morgan City Police Department on a warrant. The Morgan City Police warrant was the result of a complaint filed Nov. 5, 2014, in which Ruffin is accused of entering a Brownell Homes residence then committing a theft of a cell phone before leaving. He was jailed.
—Robert W. Choate, 57, of Federal Avenue in Morgan City, was arrested at 9:15 p.m. Thursday on the charges of simple battery and disturbing the peace intoxicated.
Officers were dispatched to a Fourth Street residence in regards to a battery being committed on a female victim, police said. Officers learned from the victim that Choate had struck her repeatedly.
Officers also learned that the victim had struck Choate in an effort to defend herself. Officers located Choate a short distance from the residence. Choate was found to be in an impaired condition. He was jailed.
St. Mary Parish Sheriff Mark Hebert reported responding to 34 complaints in the parish and reported the following arrests relating to east St. Mary Parish:
—Jordon Bourque, 27, of the 200 block of East Vermillion Street in Abbeville, was arrested at 10:57 p.m. Wednesday on the charges of improper lane usage, driving under suspension, possession of methamphetamine with intent to distribute, possession of drug paraphernalia, open alcoholic container in motor vehicles and on a warrant for failure to appear on the charge of simple battery.
St. Mary Parish Sheriff’s Office Narcotics Division detectives patrolling the Berwick area observed a vehicle repeatedly crossing over the fog line on U.S. 90 and conducted a traffic stop. Detectives made contact with the driver, Bourque, and learned that he was driving with a suspended license.
Detectives also observed an open alcoholic beverage inside the vehicle. Continuing the investigation, detectives received consent to search the vehicle and located two bags of methamphetamine and several items of drug paraphernalia, Hebert said. Bourque was jailed with no bail set.
—Destiny N. Conley, 21, of the 100 block of Blakesley Street in Franklin, was arrested at 2:21 p.m. Thursday on a warrant for theft more than $500.
A deputy made contact with Conley at the St. Mary Parish Sheriff’s Office in Franklin and learned of the active warrant for her arrest. The warrant stems from an investigation into an employee stealing merchandise from a store in Bayou Vista, Hebert said. Conley was released on $1,500 bail.
—Stefan Weaver, 23, of the 100 block of Beham Court in Thibodaux, was arrested at 10:15 p.m. Thursday on the charge of reckless operation of a vehicle. A deputy assigned to patrol the Bayou Vista area located a pick-up truck in a ditch off U.S. 90. The deputy made contact with the driver, Weaver, and learned that he lost control of the vehicle while attempting to make a U-turn, Hebert said. Weaver was released on a summons to appear in court July 22.
Patterson Police Chief Patrick LaSalle reported the following arrests:
—Michael Coleman, 34, of the 1500 block of Live Oak Street in Patterson, was arrested at 7:41 a.m. Thursday on the charges of resisting an officer with force, possession of marijuana, contraband in a penal institution, remaining where forbidden, disturbing the peace by language and criminal damage to property.
Coleman was jailed with no bail set yet.
—Gregory T. Hunt, 37, of the 300 block of Veterans Boulevard in Patterson, was arrested at 12:23 a.m. today on the charge of disturbing the peace intoxicated.
Hunt was jailed on $413 bail.
Berwick Police Chief James Richard reported the following arrest:
—Marty Arnaud, 48, of the 3900 block of Mount Street in Berwick, was arrested at 11:09 p.m. Thursday on the charges of careless operation with a crash, driving while intoxicated second offense, driving under suspension and no proof of insurance. No bail is set yet.