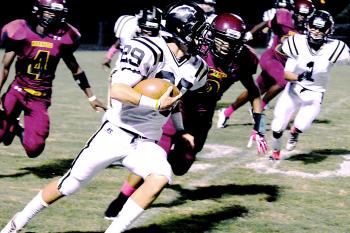 If we go in and score there, the momentum goes our way and maybe some luck goes our way. It didn’t happen.
Franklin, La.

By GEOFF STOUTE
gstoute@daily-review.com
The Berwick offense had a chance to jump on Franklin High School early in Thursday’s contest as Berwick defensive back Brooks Richard picked off a Franklin pass and returned it to the Franklin 8.
Unfortunately, Berwick could not get anything going offensively and Richard’s 29-yard field goal was unsuccessful.
It was just that kind of night for the Panthers as they struggled to get anything going in a 50-0 loss to Franklin in both teams’ district opener Thursday night.
“If we go in and score there, the momentum goes our way and maybe some luck goes our way. It didn’t happen.”
Brodie, a former assistant coach at Franklin, said the Hornets are a “very physical, experienced team. … They got 12, 13 of them that have been starting since the ninth grade and they took their lumps. I was here with them in J’s (Ina) first year. … They’re building like I’m trying to build at Berwick. I think they’re a good football team.
“They’re ready to take that next step to the playoffs and I couldn’t be more happier for them,” Brodie added.
While Berwick couldn’t convert on the field goal, its defense held a long Franklin drive down to the Berwick 30 when on fourth down, Franklin quarterback Jarion Brown’s pass was broken up.
While Berwick gained a first down on its next possession via an 11-yard pass from Bobby Boudreaux to Tim Shelby, the squad turned the ball over one play later on a fumble at the Berwick 43.
Franklin needed just two plays to cash in as Brian Robertson followed a Brown 11-yard run with a 27-yard carry for the touchdown.
Sholamo Elzy’s two-point conversion was good for the 8-0 Franklin advantage with 2:38 remaining in the first quarter.
Franklin would score on its next four possessions as the squad got a touchdown run from Brandon McFarlane from 42 yards out with 8:45 left in the second quarter, a 3-yard McFarlane score at the 6:22 mark after the Hornets’ defense recovered a Berwick fumble, as well as a McFarlane 19-yard run at the 2:35 mark and a 24-yard run by Brown with 54 seconds remaining in the first half for a 36-0 advantage.
Franklin would add two more touchdowns in the second half, one via McFarlane’s 23-yard run at the 11:10 mark of the third quarter, one play after its defense recovered a Berwick fumble; and again at the 4:47 mark of the third quarter on an 82-yard run by D’andre Charles.
Franklin’s offense churned out 519 yards of total offense, including 355 on the ground.
Its defense limited Berwick to 49 yards of total offense (39 passing and 10 rushing).
“We couldn’t move the ball very well,” Brodie said. “Of course, we couldn’t get any push (on the offensive line) and that’s definitely the difference in the game. They got a lot of push. Their offensive line knocked us back pretty good.”
Berwick will return to action Oct. 18 when they host Lafayette Christian in a non-district contest.