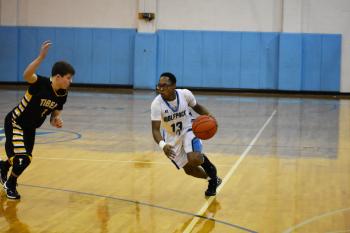 ALEXANDRIA _ For the second time in a week, the West St. Mary Wolfpack basketball team pulled off a big upset, this time earning the school’s first-ever trip to the Louisiana High School Association’s state basketball tournament in Lake Charles.
No. 13 seed West St. Mary earned a 72-66 victory over No. 5 seed Rapides Friday with a remarkable 29-19 run in the final period.
West St. Mary twice rallied from narrow deficits (36-34 at halftime) and 47-43 (at the end of three quarters) to overtake Rapides and gain a berth in the school’s first-ever All-State Sugar Bowl/LHSAA Boys’ Marsh Madness at Burton Coliseum in Lake Charles.
“It was a hard-fought victory as we knew they would press because they have the athletes to apply constant pressure,” West St. Mary Coach Gary Burrell said. “They got out at us early, causing turnovers and they were able to build an 8-point lead. We applied pressure to them in the third quarter and fourth quarters forcing turnovers as we built a lead of which we were fortunate to sustain.”
Behind double-digit scorers Tywon Polidore, Dunante Charles and Cameron Blake, the West St. Mary Wolfpack rallied from a 36-34 halftime deficit before wiping out a 47-43 deficit in the third quarter to notch the team’s first-ever quarterfinal victory.
Polidore led the Wolfpack in scoring with 20 points on seven deuces and 6 of 14 free throws. Charles finished with 17 points on 11 of 17 freebies and three floor shots. Blake struck for 14 points on four deuces and 6 of 8 charity shots.
West St. Mary sailed outfront by a score of 19-13 in the opening quarter of the see-saw affair. Rapides, which was led by Desmond Green who finished with a game-high 26 points, rallied for a 36-34 lead at intermission.
Rapides extended its lead to 47-43 after three quarters only to allow the scrappy West St. Mary Wolfpack post a come-from-behind quarterfinal victory.
The Wolfpack _ enjoying a 29-19 fourth-quarter spurt _ did the impossible in gaining the 72-66 triumph while also earning the school’s first-ever berth in the Class 2A boys basketball playoffs Friday night in the quarterfinal round.
The West St. Mary Wolfpack earned the first-ever trip to the Louisiana High School Athletic Association’s state basketball tournament Friday with the quarterfinal victory over Rapides.
“This is a big accomplishment as this is the first ever trip to the Top 28 for the school and for me as coach,” Burrell stated. “This is the school’s first ever trip to the Top 28 and this is my first as coach or player so we’re going to enjoy the ride. I’m very proud of these players because they have beaten a No. 2 seed and a No. 4 seed to get to the school’s first-ever Top 28.”
Polidore connected on seven floor shots along with 6 of 14 freebies for 20 points. Charles made good on three 2-pointers and 11 of 17 free throws for 17 point while Blake polished off the Wolfpack double-figure scorers with 14 points on four deuces and 6 of 8 charity baskets. Wayne Armelin pumped in a pair of 3-pointers for six points while Oshay Phillips tossed in five points on one 3-pointer and one two-pointer. Dondre Johnson tallied five points on a pair of 2-pointer baskets along with 1 for 1 from the line while Scottie Gray connected on one 2-pointer and 2 of 2 from the charity stripe for 4 points rounding out the scoring for the Wolfpack.
Green fired in 11 of 16 free throws along with three 3-pointers and 3 2-pointers for 26 points while leading Rapides in scoring.
No. 13-seeded West St. Mary will be looking at playing No. 1 Madison Prep on Wednesday at 11:30 a.m. in the Allstate Sugar Bowl/LHSAA Class 2A Boys Marsh Madness at Burton Coliseum in Lake Charles in the semifinals.
West St. Mary _ which earned the District 6-2A Championship with a flawless 8-0 record _ has pulled off three consecutive victories in the State Class 2-A playoffs. The Wolfpack knocked off East Feliciana on their home floor before taking to the road and posting wins over Many and Rapides in order to gain a berth in the LHSAA state basketball tournament on Wednesday in Lake Charles.