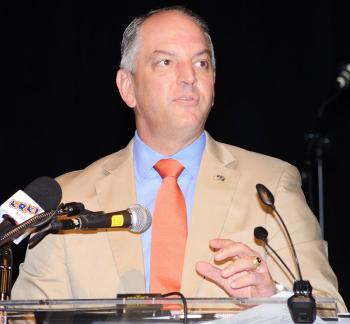 It’s no secret that this region of the state has some of the most beautiful and bountiful areas of southern Louisiana. Those of you who live here are fortunate to call it home. There are hundreds of historic landmarks, thriving and diverse communities and growing economies. An investment in your future is an investment in the state’s future.
Like many cities and towns across the state, transportation and infrastructure present ongoing challenges and opportunities for improvement. I’m committed to finding solutions to problems that will improve economic growth, reduce traffic congestion and improve access and connectivity throughout the state’s multimodal transportation system. And I am making good on that commitment working with your local and state leaders like Rep. Sam Jones and Sen. Bret Allain who have been champions for this region.
Under the leadership of Secretary Shawn Wilson, the Department of Transportation and Development has either completed or will begin working on many significant road and bridge projects in this area this year. In St. Mary Parish alone, our total state and federal investments from January 2016 to the present is $32.8 million. Investments in the Acadiana region -- including Acadia, Evangeline, Iberia, Lafayette, St. Martin, St. Mary and Vermillion Parishes total $190 million.
The U.S. 90 Interchange at La. 318 is a $56 million Design-Build project currently in progress. The design and construction are occurring simultaneously thereby accelerating the timetable of the project -- conception to completion- from eight to three years. The highway from Youngsville to the Wax Lake Outlet will be brought to interstate standards for I-49 south.
It’s important to note that our investment in I-49 South is one of the largest investments in construction jobs and multi-modal infrastructure that will help all travelers -- from residential to industrial to commercial.
Installing J-turns along U.S 90 between Patterson and Bayou Vista will not only solve a major traffic problem that has existed for years, but most importantly it will save lives. Already in the works, the cost of this project is nearly $16 million. There have been far too many accidents in which citizens have lost their lives or been severely injured. This project, which also includes building turning lanes, installing traffic signals and removing the crossovers on the 11 mile stretch of highway from Calumet to Berwick, is projected to reduce accidents by 32 percent and injuries by 50 percent.
Bridges are vital to the economy and safety of this region. They connect the communities of Morgan City, Berwick, Bayou Vista and Patterson, enable much needed commerce from the sugar cane fields to continue flowing, and provide evacuation routes during severe weather. Given the catastrophic floods of last year, we need to do everything possible to make sure that our bridges are repaired, improved and maintained to the highest standards.
Many of you are familiar with the historic Bayou Teche Bridge in Oaklawn and how its age and disrepair have prevented sugar cane farmers from safely crossing it. This is a serious problem for an industry that is a major economic driver.
Nearly $10 million has been dedicated to replace and upgrade this historic bridge. A gentleman who lives nearby has graciously agreed to have the original structure relocated to his property in order to preserve its history.
Upcoming projects include up to $50 million in structural improvements to the Atchafalaya River Bridge, the “new bridge,” and the Berwick Bay Bridge, known as one of the worst bridges in the state. The Franklin Bridge is getting a $3.6 million facelift that will enable motorists to enjoy a much smoother ride by April.
Just outside of St. Mary Parish, in Jeanerette, an $8 million ingress and egress on Canal Street was completed a few months ago. Without that improvement there would be no access from U.S 90 into downtown.
here are also two more safety projects on tap that will improve the U.S. 90 curb and install cable median barriers like those now in place between Baton Rouge and New Orleans.
Good things are happening and more is planned to help improve the roads, bridges and highways you, your family and neighbors travel daily as well as the ports and waterways that are integral to our state. As I have said before, transportation connects people to opportunities which help invigorate communities.
Let’s continue this push for progress together.
The public comment email link on Gov. John Bel Edwards’ website is http://gov.louisiana.gov/index.cfm/form/home/4