Coalition pushes for I-49 South project 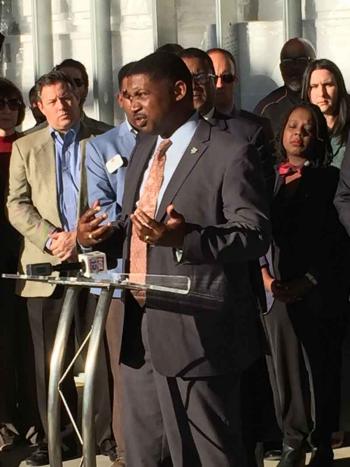 Staff Report
LAFAYETTE — Officials with One Acadiana have made no secret as to the two-year-old organization’s top priority, the completion of the I-49 South project.
The project will ultimately extend I-49 through Highway 90. The I-49 Connector through Lafayette is a major part of that project.
The effort received a boost Monday, with the formation of the “Connect Lafayette Coalition.” The coalition is made up of numerous area organizations.
One Acadiana President Jason El Koubi made the announcement during a press conference Monday morning at the site of the new Destiny of Faith Church, which is currently under construction about a mile from where the I-49 Connector will run through Lafayette.
“I think it is fair to say that the I-49 Connector Project,” El Koubi said, “is the single most consequential investment that we can make for the future of Acadiana.”
Taking part in Monday’s announcement were representatives from the organizations participating in the coalition with One Acadiana. Those groups include:
· Broussard Chamber of Commerce
— Greater Southwest Black Chamber of Commerce
— I-49 South Coalitioon
— Lafayette Economic Development Authority
—REALTOR Association of Acadiana
— Youngsville Chamber of Commerce
— Senior Pastoral Alliance
— Upper Lafayette Economic Development
— Louisiana Oil and Gas Association
— Acadiana Planning Commission
“I thank these organizations,” El Koubi said. “This is a opportunity to drastically improve our transportation network. It will allow us to spend less time in traffic and more time living.”
Safety factors into I-49 extension, El Koubi stressed.
“I don’t need to tell you the safety benefits,” El Koubi said. “We all know how bloody Highway 90 has been in the past. Bringing it up to Interstate standards will improve that, in the same way that it will improve evacuation in times of emergencies, such as when a hurricane is coming.”
For those who would like to become more involved in the project, El Koubi said the new website, www.connectlafayette.com, will allow for that.
“This is a complex project with a lot of questions to ask along the way,” El Koubi said. “This coalition is a platform. We have launched the website to support the coalition. This is a place to learn about the project, with some facts that respond to some of the myths that are out there. It’s a way to get educated.
“It’s also a way for people to signal their support for the project to folks who have influence on this from every level of government.”
Shawn Wilson, secretary of the Louisiana Department of Transportation and Development (DOTD), is among those in government who are hearing that support.
Wilson said during Monday’s press conference that he is working to aid that support as much as possible.
“We are committed to getting it right,” Wilson said. “We are committed to providing a world-class transportation system. I am so very excited to see the support here for the Connect Lafayette Coalition. The DOTD has remained committed to this project, and I give you my word as secretary that we are going to hear and listen to you.
“We are going to do this together, because that is what this coalition represents.”
El Koubi said support from Baton Rouge and other levels of government is vital.
“We are partners in getting this designed right,” El Koubi said.