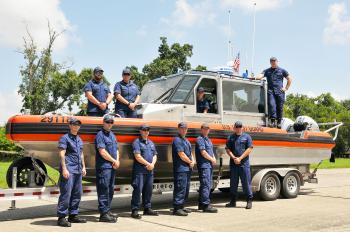 An order for 16 more 29-foot boats built by Metal Shark Boats of Jeanerette that U.S. Sen. Mary Landrieu, D-New Orleans, called the backbone of the Coast Guard fleet, was placed Friday after she urged acceleration of boat orders, the senator said.
The second generation of Response Boats - Small, called RB-S II, are multi-mission vessels used in search and rescue missions, and all sorts of other maritime law enforcement, port security, interdiction and environmental response situations, Justin Smith, chief mechanic for the Marine Safety Unit of the Coast Guard in Morgan City, said.
Metal Shark Boats won a $192 million contract in November 2011 to build up to 500 RB-S IIs, according to a 2013 Louisiana Economic Development news release.
A $1.52 million shipyard expansion was begun to meet the demands of the contract and continue building more than two dozen other production models for the Coast Guard, U.S. Navy, local law enforcement agencies and foreign agencies, the news release said.
The Coast Guard announced on Sept. 25, 2013, that it placed an order for the final 15 of 35 boats ordered in the fiscal year, which brought the total number of boats on order to 99.
Landrieu said Metal Shark representatives told her office the ordering of the boats by Coast Guard had slowed and some workers were at risk of being without work within two weeks if further orders were not placed. She said she spoke with Coast Guard officials and got a commitment to order more boats in 2015 as well as urged the Coast Guard to pick up the pace of order placement immediately.
The Coast Guard had scaled back its intention to order 40 RB-Ss next fiscal year to 12 to 15, which would jeopardize the ability of Metal Shark to keep all of its production workers fully employed, Landrieu said.
“I was disappointed to hear that the Coast Guard has been slow to order new 29-foot response boats to replace its fleet of vessels that are badly in need of replacement,” Landrieu said. “I contacted the Coast Guard and urged it to act quickly and place the orders they need. I’m glad that we were able to help bring certainty to Metal Shark and the families of the over 200 shipbuilders they employ.”
In a follow up letter to Rear Adm. Bruce Baffer, assistant commandant for acquisition, she spoke of a “shortfall in procurement” of the boats since it was her understanding that there was a requirement of 350 boats but only 99 had been purchased to date.
She urged the vessels to be ordered “in a consistent manner that fosters a sense of stability for shipbuilders and their suppliers.”
Landrieu said she was working on a commitment from the Coast Guard to order at least 40 boats per year. She wrote to Baffer that she was concerned with the “slow rate of speed” at which the boats were being purchased because at that rate “it may take a decade to fully recapitalize this fleet. That path is unacceptable. … I would like to receive regular updates on your current and future RB-S procurement efforts.”
Eric Nagel, Coast Guard Acquisition Directorate spokesman, said Friday’s order by the Coast Guard brought the number ordered to 115. The unit price for this order is about $340,000 including spare parts, outfitting, trailers, delivery, and other associated costs, he said.
Metal Shark Boats is the only builder of the RB-S II, Nagel said. The contract for up to 500 boats is for indefinite delivery dates of indefinite quantities, he said.
“We order as many or as few as we need,” Nagel said. Twelve of the boats have been delivered to Louisiana stations, he said.
The RB-S II, operated by a crew of up to four people, replaces the first generation RB-S vessels which were 25-feet in length, and adds enhanced communication ability and crew comfort, Smith said.
The Coast Guard said the RB-S II replaces a class of boats first acquired in 2002 and were nearing the end of their 10-year service life.
Smith said both classes of boats see service throughout the United States under varying conditions, operations and hazards. Some boats may have longer life spans than others because of that, but a general average of a little over nine years to 10 years is expected.
The Safety Unit received the 18th and 19th boats that were produced in the new class around November 2012 to replace two of the first generation models, Smith said.
Crew members appreciate the extra room in the second generation Response Boats and the enhanced communication system improves their ability to operate missions, he said. Smith pointed out an improved sponson, the rubber and foam fendering around the boat, provides more protection to the boat as well as any other vessel the boat may pull beside. This is especially critical if a rapid emergency response is needed and time does not allow for a slower, smooth docking, he said.
The Safety Unit eventually transferred one of its RB-S IIs to another unit and got a different model whose shallow draft allows it to run in waters that the larger boat might not be able to access, Capt. David McClelland of the Safety Unit said.
The RB-S II is designed to operate at speeds of up to 46 knots per hour (about 53 miles per hour), in waters up to 10 miles from the coast in winds of up to 30 knots per hour and seas of up to 6 feet, Smith said.
The unit operates the boats from west of Vermilion Bay at Freshwater Bayou all the way to Houma, Smith said. Besides law enforcement duties, checking for boater safety and adherence to boating regulations, the unit is an integral part of planned responses to oil spills, gas leaks or other waterway pollution.