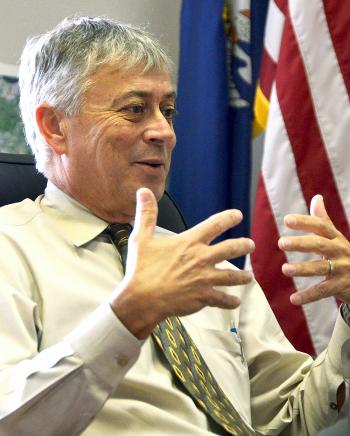 What we want to emphasize in the Bayou Chene project is that it’s not a St. Mary project. This is a regional project affecting multiple parishes.
Franklin, La.
By ZACHARY FITZGERALD zfitzgerald@daily-review.com

Design work is set to begin on moving the pump station located by Teche Regional Medical Center in Morgan City closer to Lake Palourde and raising La. 70 near the lake to make a portion of the highway part of the levee system.
The St. Mary Levee District commission approved an amendment Thursday to the engineering contract on the Morgan City Levee Improvement Project for design work regarding the movement. The commission met at the St. Mary Parish Courthouse in Franklin.
Kevin O’Gorman, of T. Baker Smith, said the St. Mary Parish Consolidated Drainage District No. 2 board recently authorized the chairman to execute the amendment provided in the preliminary project budget.
The majority of design efforts will probably be focused on the pump station, St. Mary Levee District Executive Director Tim Matte said. The funding for the design will come exclusively from the drainage district, he said.
Levee District Commission President Bill Hidalgo said the new levee alignments are much better for future development and existing issues the city has, including drainage problems.
The new alignment brings Brownell Homes into the levee system and potentially eliminates the need for one pump station, Hidalgo said.
Hellenic Investments, which owns property near Lake Palourde, has agreed to donate all the right-of-ways and borrow material needed for the project, including the Siracusaville stretch of levees, O’Gorman said. Hellenic is giving 50 acres of right-of-ways and 450,000 cubic yards for the levee improvement project, he said.
Engineers originally planned to follow the existing levee alignment for the Morgan City Levee Improvements project from the Atchafalaya River levee to Justa Street. Officials instead decided to look at changing the alignment by relocating the city’s largest pump station closer to Lake Palourde and then elevating La. 70 going north toward the Atchafalaya River levee, O’Gorman said.
The first construction project officials advertise for bid will be the portion from Lake End Park to Justa Street, O’Gorman said. Engineers plan to apply for a construction permit on the section of levees next week, he said.
Also at Thursday’s meeting, Matte mentioned several projects that the levee district is looking to get funded through the Restore Act. The act is federal legislation that provides for the disbursement of BP Oil liability funds that will come to the federal government, he said.
The funds are intended to be primarily used for coastal restoration or protection related to the oil spill, Matte said.
The Bayou Chene Flood Protection Project is one of the projects officials plan to submit. “What we want to emphasize in the Bayou Chene project is that it’s not a St. Mary project. This is a regional project affecting multiple parishes,” Matte said.
The project to close off Bayou Teche at its intersection with the Charenton Canal is another one parish officials plan to submit, as the project does not yet have a funding source, Matte said. That closure would help protect against storm surge in Franklin extending to Centerville and Verdunville, he said.
Officials have also discussed submitting a portion of the Morgan City Levee Improvements Project along Lake Palourde.
Levee district officials plan to meet with a FEMA representative to discuss the parish’s Digital Flood Insurance Rate Maps, Matte said.
Currently, FEMA maps in place for determining flood insurance rates are the 1996 maps, Matte said. In 2008, FEMA issued new maps for the parish, which changed the base flood elevation for several areas. The biggest detrimental adjustments were to Morgan City where the base flood elevations went up significantly, Matte said. Consequently, the city appealed those maps.
However, the 2008 maps actually showed lower base flood elevations for a couple areas in the parish including Amelia and Cypremort Point, Matte said. The parish has been interested in adopting the new maps so that residents in certain areas can take advantage of reduced required elevations, he said. “But they’ve been prohibited from doing that because Morgan City had the appeal,” Matte said.
FEMA now offers the concept of seclusion, which means those areas that are not yet in agreement for the base flood elevations can be taken out of the maps and still be subject to the 1996 maps. Therefore, the parish could go ahead and adopt the 2008 maps for the rest of the parish, Matte said.
Matte will have to discuss with FEMA officials secluding the areas affected by the Wax Lake East levees and the Morgan City levees, he said.
Engineers have to address some comments they received from the U.S. Army Corps of Engineers concerning the permit for construction on the Wax Lake East levees before going forward, Reid Miller of Miller Engineers said. By the October levee district meeting, Miller expects to be able to get the commission’s authorization to advertise for construction bids, he said.