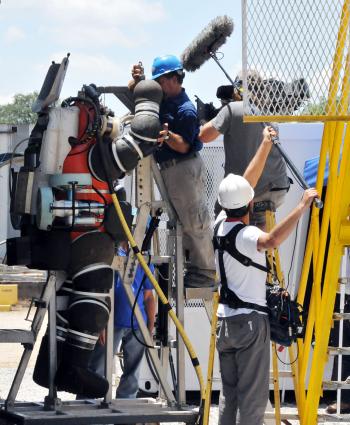 Phoenix International personnel give Alan Nursall, Telus World of Science president and CEO, instructions about the Atmospheric Diving System before it and Nursall were lowered into a tank of water in Bayou Vista. A camera crew filmed his experience for a Canadian television show.
(The Daily Review Photo by Crystal Thielepape) 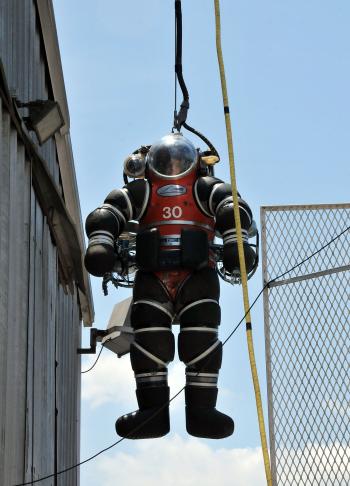 Alan Nursall, host of Daily Planet, a show on Discovery Canada, was lifted Wednesday by a crane into Phoenix International’s water tank in Bayou Vista.
(The Daily Review Photo by Crystal Thielepape) 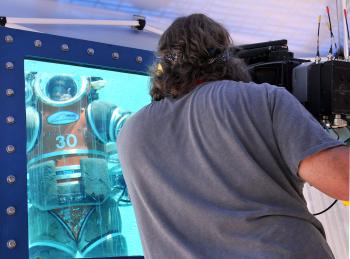 Alan Nursall, Telus World of Science president and CEO, gives camera man Chris Gargus a thumbs up once he is inside a tank of water at Phoenix International located in Bayou Vista on Wednesday. Nursall is wearing Phoenix International’s Atmospheric Diving System.
(The Daily Review Photo by Crystal Thielepape)

Would you know how to pilot an 850-pound diving suit?
Alan Nursall learned how to do just that and about the science behind the Atmospheric Diving System at Phoenix International Wednesday when he was in Bayou Vista to tape a segment for Daily Planet, a science and technology show on Discovery Canada.
Imagine, if you will, a Dirty Jobs show about science. That’s basically what The Alan Nursall Experience for Daily Planet is about.
Associate Producer Felicia Nicholson said the crew has been filming on the Gulf Coast for several days.
“Every week Alan gets to experience something that’s kind of new and unique, something that the average person doesn’t get to do,” Nicholson said.
The show had worked with Phoenix International for previous segments and Nicholson said when she learned they had a facility on the Gulf Coast, “we thought we’d see if we could get Alan to experience something like this,” she said.
Tom Bissett, manager for Phoenix, said the suits — which look something like the robot from the 1960s television program “Lost in Space” — have been in use offshore for about 10 years. They are designed to keep a diver at one atmosphere of pressure regardless of how deep the diver goes.
Essentially, Bissett said, workers can dive down hundreds of feet, surface and go to lunch. There is no need for decompression.
“That’s what they wanted to see, and they said it’s OK if he fails. I don’t want him to fail,” Bissett said.
It takes about four weeks for an internationally-certified diver to become certified to pilot the diving suit. Nursall had about two hours of training.
While a typical dive is four to eight hours, a pilot can survive 48 hours under water in the apparatus if the need arises, Bissett said.
Nursall was loaded into the suit and hoisted by crane into a 13-foot tank of water where he piloted the suit and performed dexterity tests. The trick, Bissett said, is to remember to continue to drive the suit, a task completed with foot pedals, and use of hands simultaneously.
Phoenix offers the diving suit to commercial and military customers who require a manned presence at underwater work sites where flexibility and dexterity are important, according to their website.
Daily Planet appears on Canadian television only, so the segment will not be available locally.