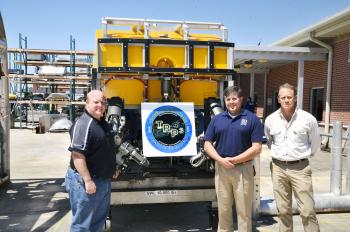 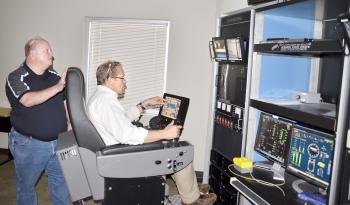 Oceaneering celebrated its 50-year anniversary with a crawfish boil, and also used the event to surprise its remotely operated vehicle manufacturing team with a special award.
Pat Mannina, Americas Region vice president and ROV general manager, said the company’s Relentless Pursuit of Perfection and Profitability award is typically given to offshore crews, but this year is the first time Oceaneering has awarded it to an onshore support group in remotely operated vehicle manufacturing, Mannina said.
“We used the 50th anniversary as cover. It was a surprise to them that they were actually awarded this,” Mannina said at a ceremony on April 9.
The only place that Oceaneering still does diving is in the Gulf of Mexico and has its diving unit based in Siracusville. “This is company started off as a diving company,” Mannina said. Oceaneering has evolved to an engineering, technical-based business, he said.
The company was founded by Johnny Johnson and Mike Hughes in 1964, and both resided in Morgan City, Mannina said. Oceaneering became a public traded company in 1972. It started as Oceaneering Worldwide Divers in Bayou Vista, and the company completely vacated the old facility in January 2013, Mannina said.
The company has been operating its Morgan City facility for six years after moving from the facility in Bayou Vista.
Oceaneering, which has its headquarters in Houston, has its Gulf of Mexico ROV operations in Morgan City. ROVs built in Morgan City are shipped across the world, Mannina said. The facility functions as an inventory facility as well.
The ROVs are used primarily in the oil and gas industry. The company will occasionally operate ultra-deepwater ROV systems for search and salvage efforts, Mannina said.
The Morgan City facility employs roughly 350 people. There are 58 employees in the manufacturing division, Mannina said. “This year is in celebration of the employees, our customers giving us the work and our suppliers in the local area supporting us over the past 50 years and helping build Oceaneering to what it is today,” Mannina said.
An ROV was being refurbished Wednesday at the facility to be put in a museum in Galveston, Mannina said.
Dave Macnamara, Americas Region ROV manufacturing manager, said workers at the Morgan City facility do all the wiring for the ROVs. Macnamara showed a 3,000-meter telemetry box, which Mannina called the “subsea brain of the ROV.”
Oceaneering has a training center to bring new employees to teach them about the fundamentals of ROVs, and then provides repair and maintenance training, Mannina said.
An ROV is tethered all the way up to the surface of the water, Mannina said. The vehicle is able to manipulate items as someone’s hands could do delicately or with great force. “You could pick up a raw egg without cracking it, or you could crush … your arm,” Mannina said.
New employees also get a week of ROV simulator training and get a week of piloting the vehicles, Mannina said. “An ROV is full ocean depth so it can go to the deepest part of the ocean in the world as long as it’s rigged for it, and can stay down there almost indefinitely,” Mannina said.