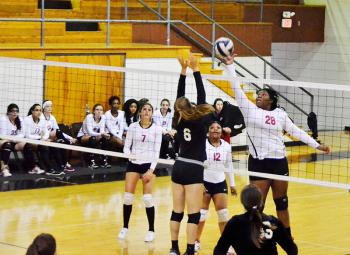 Patterson High School’s volleyball team, in white, scrimmages with South Terrebonne recently. New rules governing the release of information about public school students and the St. Mary Parish School Board’s policy now require a signed parental consent form before photos or information about students can be disclosed publicly. This may prevent some athletes from seeing their pictures in the newspaper, and it may make scholarships and financial aid tougher to obtain in other cases.
The Daily Review/Geoff Stoute

Federal and state authorities have moved to protect potentially sensitive information about public school students.
But the same rules, interpreted strictly, could have unintended consequences. The consequences might include keeping a football player’s picture out of the newspaper. Or they might prevent a student from winning a scholarship.
According to St. Mary Parish School Board minutes, Eric Duplantis, school board legal adviser, stated that a new act passed in the last legislative session essentially turned the federal FERPA (Family Educational Rights and Privacy Act) into state law.
This act requires school boards to protect personal information about students.
The Louisiana Legislature passed Revised Statute 17:394(H), formerly House Bill 718, authored by state Rep. John Schroder, R-Covington.
Schroder’s bill and previous law allowed school districts to send home consent forms that would let the district release information in certain cases. But concerns about how strict the new law actually is led Schroder to seek an attorney general’s opinion.
The privacy law “authorizes local public school boards to adopt a policy for access to student records but does not include any specific requirements for such policies,” said Attorney General James “Buddy” Caldwell in his July 29 opinion.
“As such, the content and application of such policies is left to the discretion of the local public school boards and the proposed policy language is not inconsistent with La. R.S. 17:3941(H).”
The St. Mary Parish School Board approved its own privacy policy June 9, and it’s now being enforced.
“I support House Bill (HB) 718,” said Lottie Beebe, Board of Elementary and Secondary Education (BESE) representative for District 3.
“It ensures school systems provide confidentiality for students particularly with what goes on in the world today,” continued Beebe.
Before HB 718, there was no concise process in place for releasing student information. Permission was sought for releasing student information on an individual basis for specific situations, or in some cases, none.
St. Mary Parish Public Schools’ “principals are collecting forms [student release information] through a student’s homeroom teacher and tracking those that were returned with parental signatures,” said Teresa Bagwell, assistant superintendent of administration and curriculum for St. Mary Parish Public Schools.
For schools like Morgan City High School, collecting forms can be a “monumental task” with approximately 800 students.
“We have offered incentives to homeroom classes that return all of their paperwork,” said Principal Mickey Fabre.
The secretarial staff has come up with a unique way to keep track of the forms through a sticker system. Automated phone calls will be placed for those students who have not returned forms.
“We also have 50 clubs/teams/organizations on our campus,” said Fabre. “The sponsors of each program have also been working hard to make sure that each member returns their forms.”
Sponsors of the school organizations were asked to keep a copy of their members’ forms in a folder.
If students do not return their forms or consent is not given by parents, it also “jeopardizes a students’ chance of receiving a scholarship,” said Beebe.
In Louisiana, the Taylor Opportunity Program for Students (TOPS) is a state scholarship program for residents.
School systems have contractual agreements with outside agencies specifically for sharing data. Due to the sensitive nature of distributing private student information, parents have the right to view those contracts.
All students in Louisiana have been assigned an identifier made up of randomly generated numbers. The identifying number stays with the student up until 12th grade.
St. Mary Parish schools’ consent form list examples of the types of services requiring the use of personally identifiable information includes yearbooks, sports programs, honor roll, graduation, school pictures, social media in the Internet, Wi-Fi access, and direct or related services to students with disabilities.
“If parents sign, it’s business as usual,” said Kenneth Alfred, St. Mary Parish board member for District 3. “If they don’t sign the form, no pictures or names go in programs, yearbooks, or put in newspapers.”
Consequently, social media used by the general public will make regulating the enforced privacy law difficult.
“Social media is going to be a challenge,” said Beebe.
“The school system is not equipped to comprehensively monitor social media,” Bagwell said in an email, “however, teachers and school personnel have been provided with both legislative acts (i.e. Act 837, Act 228) and St. Mary School Board policy as it relates to any sharing of student information, including social media.”
“The Legislature will have to go back and change those things,” Beebe said.

This story was written by Shea Drake of The Daily Review staff. Reach her at sdrake@daily-review.com.