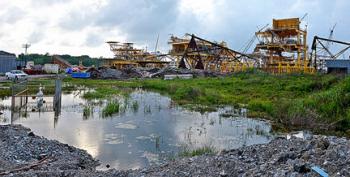 AMELIA, La. — Work to finish cleaning up the former Marine Shale Processors site just outside of Amelia, which began in February, is ongoing with June 26 as the projected completion date of the cleanup, according to the March monthly progress report from Environmental Resources Management.

Contractors were hired by the Louisiana Department of Environmental Quality to clean out the hazardous waste materials and other material on the site, including in the primary kiln, tank farm, the oxidizer and the barge areas by Bayou Boeuf, said Vicki Hadwin of the department’s Remediation Services Division.

Environmental Resources Management Group is the environmental consultant for the cleanup.

The contractors are working on stabilizing the waste in the barge tanks now, Hadwin stated in an email.

“This will allow the material to be transported and disposed. It is too wet in its current condition,” Hadwin stated. Workers also set up a crane Tuesday to start taking down the hopper tanks, which have been emptied.

“We will begin working on the oxidizers, the big red u-shaped structure, in about three weeks,” Hadwin stated.

“They had a couple things come up that added to the schedule. They were having some trouble emptying out some of the tanks, stuff was really hardened in there … so it took longer,” Hadwin said.

Brandenburg Industrial Service Company is the demolition contractor and Clean Harbors Company is doing the waste transportation and disposal.

The Department of Environmental Quality announced at the end of January that cleanup work would resume in February after the initial cleanup phase was completed in 2008. That initial phase was to clean up some tanks on the site that were leaking, Hadwin said.

In March, work accomplished included beginning demolition of the tanks and vessels in the tank farm area. Work also began to demolish the north side of the primary kiln at the site, according to monthly progress report for the project from Environmental Resources Management. The kiln was used to incinerate hazardous wastes.

The department is waiting on samples to come back so the pieces of the kiln can be loaded up for disposal, Hadwin said.

By the end of March, Brandenburg had demolished an office building referred to as the “white house.” Brandenburg was also 92 percent done with decontamination and demolition of the tank farm area, according to the progress report.

By the time the cleanup phase is complete, all hazardous materials will have been removed from the site, Hadwin said. The only building that will be left on the site is a warehouse that does not have any waste in it, Hadwin said in February.