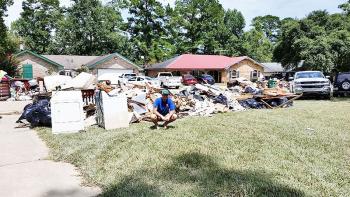 Nicholas Loupe crouches in front of a home The Cajun Army gutted. The house was one of over 400 homes the group helped clean after the devastating August floods. (Submitted) 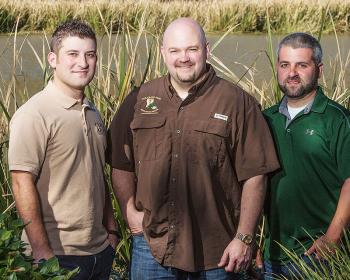 Brothers Nicholas Loupe, left, and Joshua Loupe, right, both of Morgan City, helped Chris King, center, start “The Cajun Army” after the August floods in south Louisiana to coordinate flood recovery efforts. To date, The Cajun Army has gutted over 400 homes and has over 10,500 members in its Facebook group. The group is now beginning to help people rebuild their homes. (Submitted)

A movement with roots in Morgan City helped clean homes ravaged by the August floods in south Louisiana, comforted many who lost everything and continues to assist in the recovery.

The St. Mary Chamber of Commerce recently honored brothers Nicholas Loupe and Joshua Loupe, both of Morgan City, and Chris King of Prairieville with the chamber President’s Award for their extraordinary volunteer work with The Cajun Army.

The three men founded The Cajun Army to coordinate recovery efforts after the August floods.

The Loupes and King volunteered many long hours coordinating recovery efforts in the aftermath of the floods, Chamber President Donna Meyer said.

“For the Cajun Army to go in and help these people that otherwise either couldn’t do it themselves or get help, it was just the most wonderful thing,” she said.

The Cajun Army is registered as a C corporation and a 501(c)3 organization. The group doesn’t accept monetary donations, only volunteers and donations of items.

Nicholas Loupe, 29, and Joshua Loupe, 31, own Intercoastal Redi-Mix in Morgan City and met King, 46, owner of Next Level Solutions, after hiring him to help them run their small business.

On Aug. 14, 2016, they borrowed two boats and made an 11-hour boat ride to rescue some of King’s employees and their families, whose homes had flooded in the Denham Springs area. The three men were among the many rescuers that participated as part of what was dubbed “The Cajun Navy.”

The emotional and physically-trying journey led the Loupes and King to rescue 10 people who were stranded.

“We were all raised ... with servants’ hearts. And we just couldn’t not do anything about it,” Joshua Loupe said.

Joshua Loupe was working as a paramedic in New Orleans when Hurricane Katrina hit in 2005.

“Katrina, they had time to get out, but they chose not to. This was unexpected, water rising faster than you can fill up a glass of water in the bathtub,” Joshua Loupe said.

After the rescue trip, the three men saw that The Cajun Navy’s Facebook group received an outpouring of support from the community with people asking how they could help with the recovery, Nicholas Loupe said.

King contacted Nicholas Loupe about King’s idea to start a Facebook group for The Cajun Army.

“The water’s going to go down. People are still going to be in need,” Nicholas Loupe said of their conversation at the time of the flood. “The homes, now, have got to be tended to.”

King started “The Cajun Army” Facebook group and added 100 friends, hoping to connect volunteers with people who needed help, whether that meant a place to stay or food or something else.

King serves as organizer of the group. Nicholas Loupe handles operations “boots on the ground” work, while Joshua Loupe is the group’s strategist, dealing with technology “behind the scenes.”

King relied on his experience planning church mission trips to coordinate the effort. King’s cell phone started “blowing up” with messages soon after beginning to grow the group. Within a week, 3,000 people had joined the group.

The organization has several teams that handle different aspects of the recovery efforts, including needs, demolition, supplies, food, social media and a warehouse.
The needs team is a vital part of The Cajun Army, providing counseling for people who have lost their homes, King said.

“We quickly realized that it was something much bigger than the three of us,” King said.

The Facebook group now has over 10,500 members, and people from across the country and even as far as France who have helped gut houses, King said.

“It just turned into this huge movement,” King said. “We were providing housing and meals and connecting them with people that needed help.”

To date, the group has gutted over 400 homes in addition to partial work on other homes. Much of the gutting work in south Louisiana is complete. Nearly 1,100 families have contacted The Cajun Army for help.

The Cajun Army is partnering with Experience Mission, a mission trip organization, to help with the rebuilding process.

Last week, members of The Cajun Army were in Livingston Parish clearing trees out of yards, King said.

Since forming The Cajun Army, the group has expanded its efforts to help people in other states recover from disasters.

“We’re not somebody that’s going to be here today and gone tomorrow,” Nicholas Loupe said. “We’re wanting to be a propped up organization that people can come to, and we can have the resources readily available to help people all around the country.”

To volunteer, donate items, request help or learn more about The Cajun Army, visit its website at thecajunarmy.com.