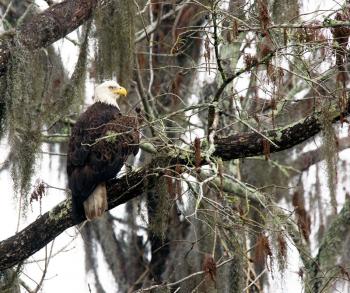 This is one of 25 eagles spotted by Eagle Expo participants during Saturday's boat tour along the Intracoastal Waterway.
The Daily Review/Bill Decker 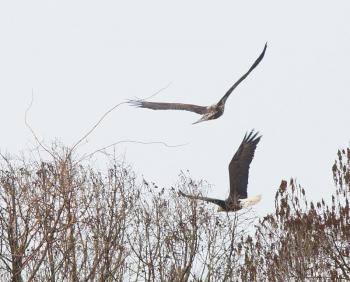 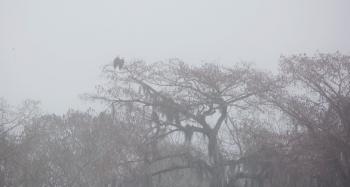 Two bald eagles sit side by side atop a tree in the fog Saturday along the Intracoastal Waterway.

“Bald eagles are doing fine in Louisiana,” said Michael Seymour of the Louisiana Department of Wildlife and Fisheries at a Saturday morning seminar at the Petroleum Club.

It was all part of the 2017 Eagle Expo, which every year celebrates the region’s role in the amazing comeback of America’s national bird.

Seymour is a nongame ornithologist and scientific permits coordinator for his department’s Louisiana Natural History Program. He’s one of the people you call if you have a building project or some other activity that might intrude on the well-being of an active bald eagle nest. He also helps coordinate surveys of Louisiana bald eagle numbers, when there’s money for such surveys. Often, there isn’t.

But, whatever difficulties urban sprawl and government funding may present, they haven’t blocked the species’ resurrection.

In 1963, according to U.S. Fish and Wildlife Service statistics, there were fewer than 500 breeding pairs in the entire country. According to the most recent count, Seymour said, Louisiana alone has about that many nests. And 353 of them are considered active. The Atchafalaya Basin is prime bald eagle habitat and has the richest concentration of nests in the state.

Life is tough for newly hatched eagles. Many die before they fledge, or leave nests that can be 10 feet in diameter and weigh half a ton or more. But Seymour said 260 to 270 of Louisiana’s bald eagle nests are rated as “successful,” which means that at least one young eagle survives.

Seymour ran down a list of laws and regulations that have helped eagles rebound. They date to the Migratory Bird Treaty of 1918, and include the banning of DDT in 1972 and endangered species legislation in 1966 and 1973.

The DDT ban seems to have been particularly effective. The once widely used pesticide robbed egg shells of calcium, making them thin and brittle.
Nationwide, the U.S. Fish and Wildlife service now counts nearly 10,000 breeding pairs.