Keeping the channel clear; Dredging impact could be worth $270M 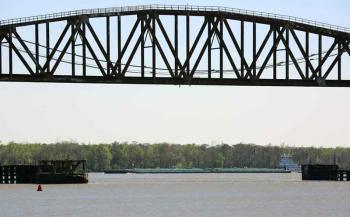 A tug pushes a barge past the railroad bridge over Berwick Bay on Friday. Port of Morgan City officials are debating whether to buy or hire a barge that could keep the Bar Channel at a reliable depth to accommodate more water traffic. (The Daily Review/Bill Decker)

A few million dollars of investment in annual dredging costs could have a return of over $200 million of economic impact to the region, and Port of Morgan City leaders are making that pitch to anyone who will listen.

Port officials are exploring the possibility of buying or leasing a dredge that would be dedicated solely to dredging the Atchafalaya River Bar Channel year round, said Port of Morgan City Executive Director Raymond “Mac” Wade. The Bar Channel begins at the end of the river about 20 miles south of Morgan City and empties into the Gulf of Mexico.

There’s about a 7- to 8-mile stretch in the Bar Channel that accumulates fluff, or fluid mud, making navigation for some vessels difficult or impossible and is stifling commerce on the waterways. Having a consistent 20-foot deep channel would benefit all industries in the region, Wade said.

A study by LSU Economist James Richardson showed that having the Bar Channel maintained to 20 feet deep, 365 days a year, would have an annual economic impact of at least $137 million and up to $270 million.

Import-export ships made 20 trips to Morgan City between August 2014 and August 2015 but haven’t returned since due to lack of reliable depth in the Bar Channel. Each ship’s estimated impact to the area was $300,000.

The goal is to keep the Bar Channel dredged to its Congressionally authorized 20-foot depth and 400-foot width year round and to keep the fluff, which builds up in the channel, in suspension.

“It’s like Nestle’s Quik. You take a glass of milk, and you take a big scoop. And you throw it in there. It’s all going to settle to the bottom,” Wade said. “You’ve got the chocolate down below, and the white milk above. You take a spoon and stir it up. That’s basically what we’re looking at doing.”

Between 2004 and 2012, the port received an annual average of $18 million in federal funding through the U.S. Army Corps of Engineers to dredge the area’s waterways. But that amount has dropped to roughly $6 million a year after Congress removed earmarks entities could receive, Wade said.

Roughly $12 million a year is needed to properly dredge the port’s waterways. Among the dredges being considered is a hopper dredge with a drag arm that could also dredge some sand in the river.

Dredging Consultant Ancil Taylor said port leaders would prefer to have the Corps of Engineers to take responsibility for finding a dredge or giving the port money to dredge the Bar Channel.

With limited funding, port officials have to choose whether to dredge the sand in the river or the fluff in the Bar Channel.

The Port of Morgan City did a dredge demonstration in summer 2016, designed to determine a feasible way to keep the Bar Channel adequately dredged year round, he said. A hopper dredge was used at a cost of $45,000 per day.

That method proved effective at reducing the density of the fluff in the channel, but the port cannot afford to spend that much money year round. So officials are looking to reduce that daily cost.

Another option to dredge the Bar Channel is to get an offshore support vessel, which would be significantly cheaper, but couldn’t dredge sand as easily as a hopper dredge, Wade said.

Still, using a cutter-head dredge is the only effective way to dredge the sand and cover a large area of the Atchafalaya River and bays, he said.

Officials expect to begin dredging roughly 2 million cubic yards of sand in the Atchafalaya River near Eugene Island in mid to late April, Wade said. A cutter-head dredge will be used to plow through and remove the hard river sand at a cost of probably about $110,000 a day.

The port only has enough funding to dredge that stretch of river to 20 feet and 200 feet wide, he said. That dredging project will use up the port’s remaining $5.5 million in annually allocated money for dredging for the Corps of Engineers’ 2016-17 fiscal year. The Corps’ fiscal year ends Sept. 30.

However, language in the Water Resources Reform and Development Act signed into law in January by former President Barack Obama could allow the port to receive additional operations and maintenance funds to dredge at some point, Wade said.

Port leaders are looking for any possible sources of funding to get more money for dredging, he said.

Though the fluff in the Bar Channel isn’t conducive to building land, sand in the river could help restore the coast.

The Atchafalaya River has produced “the only two growing deltas in America, and we keep selling that” as a way to use fertile sand in the river to rebuild dying coastline in neighboring communities, Wade said.