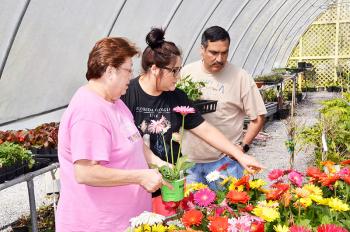 Michaela Balli points to a flower Thursday at Marvin’s Gardens near Patterson while helping her parents Tammy and Eddie Balli shop for plants for their home garden. (The Daily Review/Zachary Fitzgerald)

The start of spring is still over two weeks away, but February felt like spring began early for much of the country, including south Louisiana.

Most of the United States, particularly the South and Southeast, saw record or near-record temperatures in February, said Meteorologist Jared Rackley of the National Weather Service.

Temperatures were significantly above normal in February and from December 2016 to February, according to the weather service’s Lake Charles office.

Forecasters are projecting the region “to stay warm for the next month or so,” but “probably not as warm as February,” Rackley said.

The warm weather is helping plants to begin to grow, which could have both positive and negative effects.

Rita Taylor, part-owner of Marvin’s Gardens near Patterson, said plants are blooming earlier than they normally do.

“Usually, when you don’t have a hard winter, you’re going to have more bugs during the spring,” Taylor said.

Rackley said, “Pollen here is starting to come out quite a bit earlier than we normally see as well, thanks to the warmer weather.”

“It’s hard to say” what exactly caused the spike in the region’s temperatures for February, but the past few months have generally been warmer in the region than the typical weather that time of year, Rackley said.

The closest monitoring station to Morgan City for record-keeping purposes is in New Iberia.

Lafayette also saw a record average temperature in February of 65.9 degrees, up from the previous record of 65 degrees set in 1932. Lake Charles barely broke its February temperature record at 64.1 degrees, eclipsing the previous mark of 64 degrees from 1927.

The winter stretch from December 2016 through February in New Iberia was the second warmest on record, registering an average temperature of 61.2 degrees, second only to the 1949-50 average of 61.9 degrees.

Lafayette and Lake Charles both broke records during that same three-month stretch.

February was the second-driest on record in New Iberia, seeing just 0.36 inches of rainfall, only surpassed by the 0.22 inches of precipitation in 2000, and 3.83 inches below the norm.

March started off warm for the Patterson area with a high temperature of 83 degrees on the first day of the month. But Thursday saw a more seasonal high of 66 degrees.