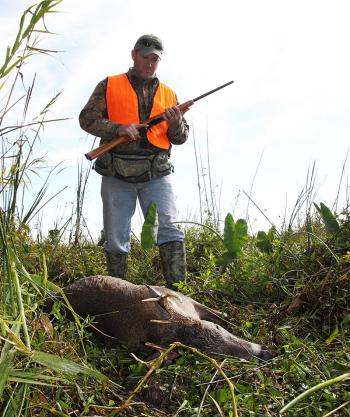 There is no doubt when it comes to hunting in the Sportsman’s Paradise, the whitetail deer is king over all other game animals.
There is also no doubt we live in a day and age where deer hunting isn’t as much about woodsmanship as it is the business of the pursuit.
As a result, the health of the state’s deer herd is extremely important to hunters.
And the Louisiana Department of Wildlife and Fisheries is extremely cognizant of the fact.
Going into the 2015-16 deer season, statewide, the deer herd appears to be stable.
But, a review of the Louisiana Department of Wildlife and Fisheries’ 2014-2015 Deer Report seems to indicate biologists continue to manage cautiously and even have some legitimate concerns to downward trends in some areas because of things like hog overpopulation, flooding, blue tongue and hemorrhagic diseases.
With the archery and primitive weapon seasons already underway in St. Mary Parish, Louisiana Department of Wildlife and Fisheries Deer Study Leader Scott Durham said, “I think the statewide herd is OK and more or less stable at this point.
“There may be some areas where we will see continued decline due to lowered productivity and the lag associated with increased hog populations and flood conditions. I have concerns for these areas. Flooding this year is mainly an Atchafalaya Basin issue and it is an issue there. It was underwater much of the spring and summer where habitat conditions, quality and productivity were reduced,” Durham said.
“Does may have a hard time raising fawns where food resources were compromised, which will be a lot of that country; especially in the southern end at the lower elevations. We’re also getting a lot of anecdotal HD reports this year, so that’s not good for deer hunters,” he said
The Louisiana deer harvest a little over a decade ago stood annually around 200,000 animals, give or take, based on department estimates from mail-in surveys. Durham attributes today’s norm of a 140,000 to 150,000 deer harvest to changes in habitat use.
“It’s a combination of things that I have written about in my annual report,” Durham said. “Habitat and productivity changes due to intensive forestry practices, invasive species, some fragmentation due to development, are all associated issues. But, hunter selectivity may also be part of the picture, where hunters intentionally pass deer.”
The coastal marshes of Terrebonne and St. Mary parishes look excellent for deer browse going into the 2015-16 deer season.
And, according to Louisiana Department of Wildlife and Fisheries browse surveys, much of the Mississippi River alluvial valley hardwoods do as well.
Areas where browse surveys seemed to show marginal or substantial habitat were in the pine-dominated regions of the state.
Durham also pointed out, by and large, deer have recovered from the coastal flooding that occurred in 2011 when the Mississippi River rose to a near record high.
“I believe we have seen some recovery in those areas since the last high water events,” Durham said. “We still have concern over low lactation rates we are seeing in some of the coastal areas, so we’re being cautious on some of our DMAP harvest recommendations.
“But overall, Area 7 is the strongest down there, and I think it’s because of the freshwater influence of the Atchafalaya River. Those marshes just look really good, especially when the deer peas really get going.”
A few notables statistic-wise worth mentioning are modern gun hunters harvested 83 percent of the deer during the 2014-15 season, with primitive weapon hunters harvesting 11 percent.
Bow and cross bow hunters harvested a combined 6 percent of the total deer taken last season.
The ratio of harvested bucks to does was 59 percent to 41 percent, respectively.
There were 192,600 hunters that harvested 139,900 deer and spent 3.8 million days afield, according to department estimates.
Hunters should pay close attention to rut activity. The Louisiana Department of Wildlife and Fisheries publishes pre, peak, and post rut periods for each zone on its website. Area 7 hunters typically see their heaviest rutting period taking place by the third week of October, when it often times is unseasonably warm.
Nevertheless, this is when hunters need to be sitting in the woods. Deer movement is at its highest when bucks are chasing receptive does.
In spite of a decline in deer harvest numbers during the past decade, the modern age of technology has allowed deer hunters to forgo some scouting and wood lore that went with success in years past. Now, trail cameras, elevated stands, deer feeders, lures and “magic” food attractants have relegated the old ways to just nostalgic conversation when down to the camp. No matter, times change.
The modern firearm deer season opened this past weekend for Area 7 hunters.
I look for another excellent harvest this year where St. Mary Parish is concerned.
Already, reports are coming in where hunters have harvested some good bucks during the archery season.
No doubt, we’ll be hearing about a few more between now and January.
John K. Flores is The Daily Review’s Outdoor Writer. If you wish to make a comment or have an anecdote, recipe or story you wish to share, you can contact Flores at 985-395-5586 or gowiththeflo@cox.net or visit his Facebook page, gowiththeflo outdoors.