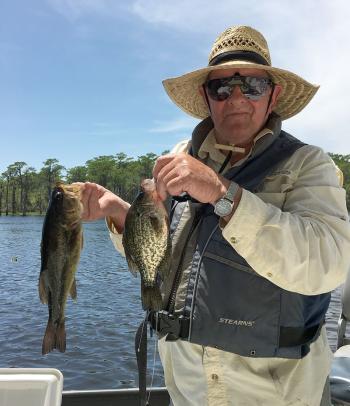 Thonis Buteaux with a good bass and sac-a-lait he caught this past Saturday in the Atchafalaya Basin above Flat Lake. (Submitted Photo/Courtesy of John K. Flores)

While concentrating on flipping my bait in a little four-foot wide space between a large cypress tree and some knees that jutted up out of the water, from behind me someone called out getting my attention.
“Are you John Flores?” the voice said.
“Yes Sir, I sure am,” I replied looking over my shoulder towards the man who knew me. “And, your name is?”
Pressing the pedal on his troll motor he turned his boat towards mine and said, “I know you – I’m Thonis Buteaux – I want to show you the fish I caught this morning.”
For the next several minutes I exchanged notes with the 73-year-old Patterson resident, while admiring his day’s catch. He had some nice ones too. Looking his fish over there were several beautiful sac-a-lait, a good size bass, and a whole bunch of chiquapins.
In short, Buteaux had himself a good day on the water this past Saturday and so did my wife and I catching bream in the basin. What’s more, no matter whom we talked to the only negative we heard was though the bite was on and fish plentiful, they were running on the smallish side.
That was true. Christine and I had to cull through fish after fish to get the seven and eight inch size panfish we prefer. But, that said – it sure was fun. It always is at this time of year when the bream bite is on.
Buteaux, who admittedly got up pretty early Saturday morning to catch most of his fish above Flat Lake, showed me a few of the baits he was using. He, like me was using a small blue and white plastic tube. But, he also was using a black and charteause colored bait, with a curly tail.
Honestly, when it comes to spawning bream it doesn’t take much to catch them. They’re aggressive, ready to eat anything that wiggles, swims or flashes near them and are plentiful.
Buteaux and I chatted about the water level in the basin. He happens to be someone who keeps track daily of river stages as far up the Mississippi River as Cairo, Illinois, plus where it stands each and every day he’s on the water. He noted that it takes about two weeks for high water to reach Morgan City by the records he’s kept over the years.
This past Saturday the river stood at five feet two inches and looks to remain steady at an even five feet the remainder of this week. For bream it could be a little lower to get a few bigger fish out of the woods, but for now everyone is catching.
When it comes to catching sac-a-lait in the basin at this time of year, Buteaux also has a few tricks up his sleeve, but made me promise not to tell anyone. However, I will say, fish are a lot like humans when it comes to comfort. Quite often they’ll get under mats of grass and lilies to beat the heat during hot days and vise versa to stay warm when it’s cold.
Bass anglers have learned to use extra heavy jig heads with 30 to 50 pound braided line to punch through grass mats. The technique works – trust me on that. When the bass and sac-a-lait aren’t biting, and the bream are, look for a few mats of grass to punch.
Bream will spawn a couple times through of the spring and summer making them pretty prolific. What’s more, you can catch bream from now through October, with the best days occurring the early part of spring. In other words – right now.
Reports of good catches of bream are being made around the local area. Best bets are the Shell Oil Field canals out of Adams Landing, any of the canals between Duck Lake and Big Fork Bayou, Grassy Lake, Flat Lake and Bear Bayou.
Reports aren’t as good coming from below the Intracoastal Canal. These areas generally get better mid to late summer and on into early fall, as the Atchafalaya River falls well below flood stage.
The bream bite is on right now, so locals will want to take advantage and get in on the action while it’s happening. If you don’t, that’s okay. Folks like Thonis Buteaux and myself will.
EDITOR’S NOTE: Flores is The Daily Review’s Outdoor writer. If you wish to make a comment or have an anecdote, recipe or story to share, contact Flores at 985-395-5586, or gowiththeflo@cox.net, or on Facebook at Gowiththeflo-Outdoors.