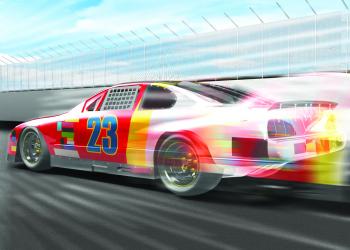 Justin Wilson always understood the danger that lurked behind the wheel for an IndyCar driver.
“When it goes wrong,” Wilson said following his 2012 return from race injuries, “it can get messy.”
It went terribly wrong for Wilson on Sunday.
The British driver was in a coma in critical condition after sustaining a head injury when he was hit by a large piece of debris that broke off another car in the crash-filled race at Pocono Raceway. IndyCar released the information on Wilson’s condition Sunday night and said he was undergoing evaluation at Lehigh Valley Health Network Cedar Crest Hospital in Allentown.
The debris shot off Sage Karam’s car when Karam spun into the wall late in the race. Wilson’s car veered left and directly into an interior wall. He was quickly swarmed by the safety crew and taken away by helicopter.
“It’s just a tough one right now,” said Michael Andretti, car owner for Wilson and race winner Ryan Hunter-Reay. “Our thoughts and prayers are with Justin right now. We’re going to see. Hopefully, he’s OK.”
Wilson’s wife, Julia, was transported to Pennsylvania from their home in Colorado by IndyCar, while his younger brother, Stefan, was lent Tony Stewart’s plane to make the trip from Indianapolis. Stewart, the three-time NASCAR champion and former IndyCar champion, is an Indiana native.
“Praying for my bro right now,” he tweeted.
IndyCar had a subdued victory lane and Hunter-Reay said his thoughts were only with Wilson, a popular driver in the paddock.
The accident was a grim reminder how drivers in open-wheel racing put their lives on the line.
Indianapolis 500 winner Dan Wheldon died in 2011 after his car became ensnared in a fiery 15-car pileup, flew over another vehicle and landed in a catch fence at Las Vegas Motor Speedway. Wheldon’s head hit a post in the fence, and he died instantly. He was the last fatality in a form of racing that saw drivers Scott Brayton (1996), Tony Renna (2003) and Paul Dana (2006), among others, die after wrecks.
IndyCar was forced to answer tough questions about safety in the scary lead-up to this year’s Indianapolis 500. The cars of Helio Castroneves, Josef Newgarden and Ed Carpenter all went airborne during practice sessions leading up to the race, though all three drivers walked away unscathed. But James Hinchcliffe suffered a life-threatening injury when he slammed into the turn three wall at more than 220 mph and a broken piece of his suspension pierced his left thigh. His season was over.
On Sunday, drivers fanned out eight-wide across the track off a restart late in the race — a spectacle both thrilling and dangerous.
“Four wide, five wide, then Takuma (Sato) got inside of me,” Indy 500 champion Juan Pablo Montoya said. “My spotter didn’t even know what to say.”
The race resumed after the Karam and Wilson accident with seven laps remaining and Hunter-Reay picked his way through the field. He passed Montoya, Takuma Sato and then used a bold inside pass of leader Gabby Chaves to take the lead with five laps to go.
Chaves then appeared to have an engine failure that brought out the caution with three to go. The race ended under yellow. Josef Newgarden was second and IndyCar points leader Montoya finished third.
Hunter-Reay was one of many discussing safety measures — and not his win — for the open-cockpit series.
“Maybe in the future we can work toward something that resembles a canopy,” Hunter-Reay said. “Something that can give us a little bit of protection and still keep the tradition of the sport. Just to be innocent bystander like that and get hit in the head with a nose cone is a scary thought.”
The 37-year-old Wilson, a native of Sheffield, England, entered this season without a full-time ride. He latched on with Andretti and was in the sixth of seven scheduled races with the team. The deal was put together right before the season-opening race in March and initially started as just a two-race agreement at Indianapolis.
Sponsorship was found for another five races as the season progressed, and Wilson finished a season-best second earlier this month at Mid-Ohio. He said after the race that he raced clean and did not take any risks that would have jeopardized eventual race-winner Graham Rahal because Rahal was part of the championship race and Wilson was not.
Wilson broke a bone in his back at Mid-Ohio in 2011. He missed the final six races of the season and wore a back brace for more than two months as he was restricted from any physical activity. The injury kept him out of the season finale at Las Vegas and the race where Wheldon died.
He broke his pelvis and suffered a bruised lung in the 2013 season finale at Fontana.
Wilson said in 2012 his injuries and Wheldon’s death did nothing to change his perspective or make him question his career choice.
“I’ve had the conversation with Julia — this is what we do, and you try to make the best plans if that ever happens,” Wilson told The Associated Press upon his return in 2012. “You’ve got to know the risks and work out if those risks are acceptable. To me, it’s acceptable. But I’m not going to stop trying to improve it.
“All the drivers, this IndyCar, we’re always trying to make it safer, but at the end of the day, it’s a race car. We’re racing hard, we’re racing IndyCars and it’s fast.”