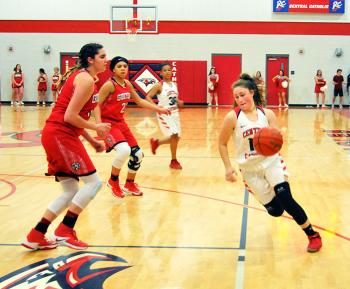 The Central Catholic High School girls’ basketball team will begin postseason play Monday when it travels to face Cedar Creek in a Division IV regional round contest set for 6 p.m. in Ruston.
Central Catholic (11-14) enters the contest as the No. 11 seed, while Cedar Creek (21-8) is the No. 6 seed.
This is the first year that schools categorized as “select” play in their own bracket. Central Catholic and Cedar Creek are competing in the Division IV bracket, which featured first-round byes for the top 11 seeds.
Central Catholic is led this season by first-year Coach Cory Brodie.
Brodie said that he thought the season, went well.
The Lady Eagles got a late start with only one practice before the season started due to a successful volleyball season and he was balancing football and basketball, too.
“The adjustment season, we had to go a bit quicker than most, but the girls are really coming and I think we’re starting to play our best basketball this season, which is all we can really ask for,” he said.
While the Lady Eagles dropped all their contests to Vermilion Catholic, Lafayette Christian, Hanson and Gueydan, the second time the Eagles faced these four teams, ranked in the top 10 in either the Division IV or Class 1A bracket, the Lady Eagles played them close.
“Unfortunately, we couldn’t pull it out, but the way we progressed, I think we’re a pretty scary 11 seed,” he said.
As for Cedar Creek, the squad finished tied for third in District 1-1A with Homer as both teams had 9-5 records.
Brodie said Cedar Creek is a tall team, and they have a good program traditionally. He said they play well and move the ball well.
“Just like us, they’re in a district to where teams like Arcadia and Plain Dealing where they have a lot of tough competition,” Brodie said. “Anybody with over 20 wins and less than 10 losses is going to be tough, especially when it’s a full day of travel going up to Ruston.”