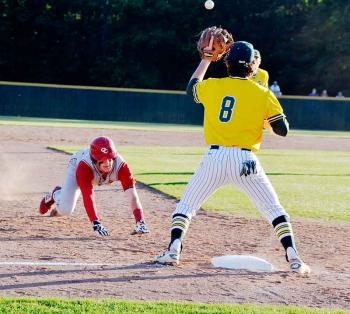 Central Catholic’s Greg Leger slides safely into third base, while Cedar Creek third baseman Aaron Clark awaits the throw during Thursday’s Class 1A quarterfinal contest in Ruston. Leger finished 3-for-4 with two doubles and an RBI as Class 1A’s top-ranked team defeated No. 9 Cedar Creek, 8-4, to advance to its fifth straight semifinal appearence May 13 at McMurray Park in Sulphur. The Eagles now will await their semifinal opponent, which will be determined today when No. 5 Hanson Memorial hosts No. 13 Catholic-Pointe Coupee. 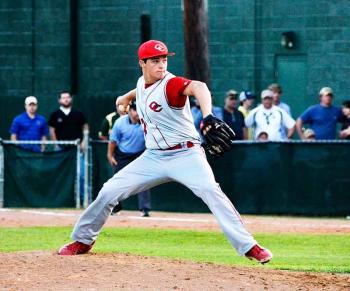 Central Catholic’s Blake Hidalgo celebrated his junior ring ceremony Thursday morning at Central Catholic, a rite of passage for a soon-to-be senior.
Thursday night, the junior right-hander took a step toward earning a ring on the baseball diamond as he overcame some tough innings early and his offense provided fire power late en route to a 8-4 win in the Class 1A quarterfinals against No. 9 Cedar Creek (18-11).
With the win, the Eagles (26-4) will advance to their fifth straight semifinal May 13 at McMurray Park in Sulphur against the winner of No. 5 Hanson Memorial and No. 13 Catholic High-Pointe Coupee. That other quarterfinal game will be played today in Franklin. Hanson is a district opponent of Central Catholic and the two teams split their regular season meetings.
As for Thursday’s game, Central Catholic broke open a close game in the top of the seventh with three runs via a combination of hits and Cedar Creek miscues.
Mitchell Lemoine led off the inning with a double to the right-centerfield wall. His courtesy runner, Cooper LeBlanc, advanced on a wild pitch to the next batter, Gregory Leger. LeBlanc scored when Leger flew out to the right fielder, who dropped the ball on an attempt to catch it for a 6-4 Central Catholic lead.
A few batters later with two outs and Patrick Barron on second base and Charlie Solar on first via a fielder’s choice and a walk, respectively, Cedar Creek reliever Josh Terral balked twice during Stefano Guarisco’s at bat. The runners moved to second and third on the first miscue and then Solar to third and Barron, scored on the second balk.
Charlie Solar came home one batter later on a wild pitch by Terral.
Hidalgo retired Cedar Creek in order in the bottom of the seventh to secure the win.
In a complete-game effort, Hidalgo surrendered four earned runs on eight hits with two walks, one hit batter and three strikeouts.
While Cedar Creek scored three runs combined on Hidalgo in the second and third innings, he bounced back and allowed just one run the remainder of the game.
Hidalgo credited his defense.
“They played well the whole game, and I knew that when I pitched, they’re more comfortable, and I know they’re there,” he said.
Hidalgo said he believes in the team and his defense.
Indeed, Hidalgo got several solid plays from his defense, none more important that an unassisted double play by shortstop Samuel Guarisco that allowed the Eagles to escape a two-on, one-out jam in the bottom of the sixth.
“The first inning was sharp, but he kind of went through a little lull where he wasn’t that sharp,” Central Catholic coach Tyler Jensen said of Hidalgo. “He was kind of losing himself a little bit, but the most important thing was that he didn’t allow the big inning.”
Without a big inning surrendered, Jensen said nearly always his offense can help a pitcher out with run support.
“That’s what he did,” Jensen said. “Once he started finding his stuff, we gave ourselves a shot, and we started getting a couple of big hits and broke it open.”
Offensively, Central Catholic pounded out 14 hits.
“Our guys found a way,” Central Catholic coach Tyler Jensen said. “I think the thing I was maybe most proud about of us at the plate was the bottom of our order, guys six through nine getting on base and finding ways to get things done. … One thing we did really well was we bunted well to get guys over and just put pressure on them, and later on we started to get some hits.”
Leger led the team with a 3-for-4 performance with two doubles, an RBI and a run, while Garber finished the night 3-for-4 with an RBI. Other top offensive contributors included Adam Dupuis, 2-for-4, a run; Drake Angeron, 2-for-5, an RBI and a run; Charlie Solar, 1-for-3, an RBI and a run; Samuel Guarisco, 1-for-3, an RBI; and Lemoine, 1-for-4, a double.
While Central Catholic got timely hits later in the game, the Eagles stranded nine runners on the base paths.
Early on, Central Catholic took a 2-0 lead in the top of the first via run-scoring singles by Garber and Leger.
Cedar Creek tied the score at 2 in the bottom of the second. Aaron Clark drove in one run on an RBI double to left-center field, while another came home via an RBI single by Jace Moss to right field.
Cedar Creek took a 3-2 lead in the bottom of the third on a sacrifice fly to right field by Parker King, and the score remained the same until Central Catholic tied it in the top of the fifth on Samuel Guarisco’s run-scoring single to left field.
The lead changed hands twice more as Cedar Creek retook the lead at 4-3 in the bottom of the fifth on a double to left field, while Central Catholic took the lead for good in the top of the sixth with an RBI single by Solar to left field and an RBI single by Angeron for a 5-4 lead.
Huff McIntosh, an LSU-Eunice signee, suffered the loss for Cedar Creek. In 5.1 innings, he surrendered five runs — all earned — on 12 hits with one walk, one hit batter and four strikeouts.