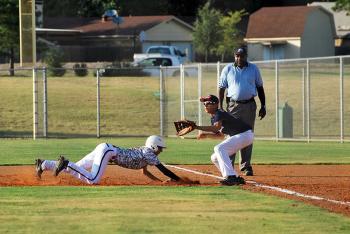 St. Mary PONY 14-year-old All-Stars’ Patrick Robertson waits for the ball at first base as a Brownsville runner dives back to the base during Friday’s game in the PONY 14 South Zone Tournament’s Elite Bracket in Burleson, Texas. Brownsville won the game 13-1. (Submitted photo/Kenia Robertson) 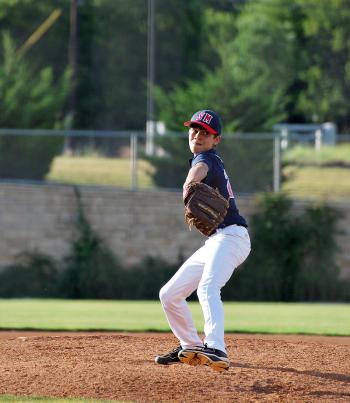 The one thing I told our kids once we got to Texas is that all of the teams here can hit the ball very well.
Burleson, Texas
By ZACHARY FITZGERALD zfitzgerald@daily-review.com

The St. Mary PONY 14-year-old All-Stars were eliminated from the PONY 14 South Zone Tournament’s Elite Bracket after losing to teams from Brownsville, Texas, and Friendswood, Texas, Friday and Saturday, respectively.
The Brownsville Nitro beat St. Mary 13-1 Friday, and Friendswood then eliminated St. Mary from the eight-team bracket with a 17-6 win Saturday.
“The one thing I told our kids once we got to Texas is that all of the teams here can hit the ball very well,” St. Mary Coach Patrick Wiley said. “If we wanted to compete with them we had to keep hitting the ball like we did in Youngsville. Needless to say we didn’t hit the ball very well in Texas.”
The Brownsville and Friendswood teams hit extremely well as both teams 10-run ruled St. Mary, Wiley said.
Brownsville made few mistakes while St. Mary committed four errors in this game, he said.
“Being the good hitting team they are, they made us pay for it,” Wiley said. “Kyle Boudreaux and Kyle Pitre pitched well, but everything we threw at them they hit it.”
In the game against Brownsville, St. Mary’s Kyle Boudreaux pitched 12/3 innings giving up six hits and allowing seven runs. Boudreaux also struck out one and walked two batters. Kyle Pitre pitched two innings giving up seven hits and allowing six runs striking out one and walking one batter. Joel Singleton pitched 11/3 innings giving up one hit and striking out two.
At the plate, Singleton was 1-for-2 with a triple. Kyle Boudreaux also went 1-for-2. Dylan Landry walked and scored St. Mary’s only run against Brownsville.
Friendswood was a lot like Brownsville in terms of hitting, Wiley said. “It didn’t matter what we threw or where we threw it they hit it,” Wiley said.
Against Friendswood, St. Mary’s Lukas Carnley pitched 12/3 innings giving up seven hits allowing 11 runs. Carnley also struck out two and walked two batters. Dylan Landry threw 32/3 innings giving up six runs on 10 hits. Carnley struck out four and walked one.
Leading hitters for St. Mary included Carnley, who went 2-for-3 with an inside in the park home run and two RBIs. Patrick Robertson was 1-for-3 with a run scored and an RBI. Hayden Pinho was 1-for-2 with one run. Landry was 1-for-2, and John Pat Dupuy went 2-for-2 with a run scored.
Brownsville later defeated Friendswood and will face Corpus Christi for the right to go to the World Series in Pennsylvania.
On Thursday, St. Mary won its first game of the elite bracket, 11-8, against the McAllen Team Predators.
Wiley thanked his assistant coaches Shawn Bernard and A. J. Pitre and all of the parents for allowing him to be part of the talented team, he said.