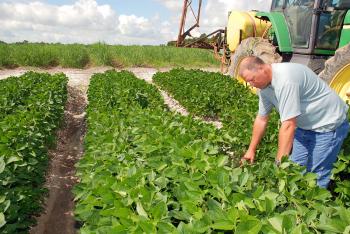 LSU AgCenter agent Al Orgeron checks on soybeans that are being rotated with sugarcane on Vincent Gravois’ farm in St. James Parish. Orgeron said he and AgCenter agents in St. Mary, Assumption and Iberia parishes have soybean research plots where they are looking for varieties that are suitable for rotation with sugarcane. The soybeans have to reach maturity in time for the grower to plant cane in mid-August.
Photo by Johnny Morgan

By Johnny Morgan
jmorgan@agcenter.lsu.edu
GRAMERCY – Growing soybeans in rotation with sugarcane is not new to south Louisiana, but doing so at a profit is causing interest to increase with some growers, according to Al Orgeron, LSU AgCenter agent in St. James Parish.
The LSU AgCenter has research plots with rotations of soybeans and sugarcane in Iberia, St. Mary, St. James and Assumption parishes where the search is on for compatible varieties that could help the growers’ bottom line, Orgeron said.
“There’s no way we can look at what’s happening in Alexandria or some other part of the state and tell St. James growers that it’s all the same,” he said. “So we are looking at specific locations so we know what we are telling growers is good for their unique situation.”
During the 1970s, some sugarcane growers were rotating soybeans with their sugarcane, but they had a major problem with grasses that couldn’t be sprayed with glyphosate herbicide without killing the soybeans, Orgeron said.
Before the glyphosate-resistance gene, known as Roundup Ready, was introduced in soybeans in 1996, spraying Roundup to kill weeds would also kill the soybeans. Growers were in a no-win situation.
“The biggest weed problems we have in sugarcane are johnsongrass and bermudagrass,” Orgeron said. “But this Roundup Ready technology lets us come in these beans and spray Roundup, which takes out these two weed problems.”
Since the technology became available, about 95 percent of the soybeans are now Roundup Ready, Orgeron said.
When rotating soybeans with sugarcane, sometimes it’s not as much about making money as it is about saving money.
This is a lesson learned by St. James Parish sugarcane farmer Vincent Gravois, who normally plants about 700 acres of soybeans a year and has about 500 acres planted this year.
“We started the rotation with soybeans again about six years ago,” Gravois said. “We tried rotating with beans back in the ‘70s, but it wasn’t like this because we didn’t have Roundup Ready beans like we do now.”
“Without the Roundup Ready soybeans, the johnsongrass was over your head and you had to have people in there shoveling it out,” Gravois said. “Beans were $6 a bushel so you couldn’t make any money.”
Orgeron said regardless of whether growers have a bean crop, they have to cultivate and spray with herbicide to keep the field clean until August when it’s time to plant sugarcane.
The key to making the rotation work is to have the soybean crop timed so it doesn’t interfere with the main business — sugarcane, Orgeron said.
“We need to have these beans to go from germination through harvest by mid-August,” he said.
Because sugarcane is grown over multiple years from one planting, the soybeans don’t have much chance of getting in the way of the cane, Gravois said.
“We cut this cane here in October last year, and the way cane is grown, we won’t be able to plant soybeans here again for probably four more years,” Gravois said.
If a grower could have his ultimate wish, it would be to not have to plant cane more than every four years, Orgeron said.
“These guys can make a few dollars if the stubble crops are good because planting cane is the most expensive operation on the farm,” Orgeron said. “It costs somewhere between $800 to $1,000 per acre to make a crop when you look at the labor, fertilizer, sprays and the planting costs.”
The sugarcane crop that will be planted in August is called plant-cane, Orgeron said. It will be harvested the first time in the fall of 2015.
“Then there are three years’ worth of ratoon or stubble crops before the cane will have to be planted again,” Gravois said. “During that year of 2018, we can plant another crop of soybean before we plant the next cane crop.”
The key to the soybean rotation with cane is being able to get the beans harvested in a timely fashion so they can plant their cane crop, Orgeron said.
“That cane is their bread and butter,” he said. “And if they can’t get the cane planted, they lose 5 tons for every month late beyond August.”