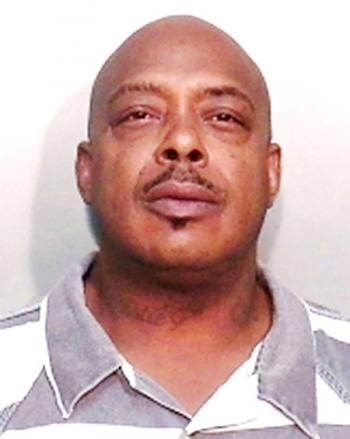 A man stopped for driving in the wrong lane of Brashear Avenue in Morgan City was arrested on a litany of drug charges this morning.
Palmer Cox, 48, of Oregon Street in Berwick, was arrested at 12:51 a.m. today for operating a vehicle with a suspended driver’s license, improper display of license plate, improper lane usage, third offense possession of Schedule I marijuana, possession of Schedule I MDMA (Ecstasy) with the intent to distribute, possession of Schedule II oxycodone with the intent to distribute, possession of Schedule II hydrocodone with the intent to distribute, third offense possession of drug paraphernalia, possession of a legend drug (Phenergan), possession of a legend drug (Flexeril), possession of a legend drug (Viagra), and transactions involving proceeds from illegal narcotics activity.
Morgan City Assistant Chief Mark Griffin Jr. said a patrolling officer saw a vehicle traveling in the wrong lane of Brashear Avenue near Sixth Street and approached to investigate. The vehicle did not have a proper license plate displayed and was stopped, he said.
The driver, identified as Cox, could not produce a valid driver’s license and a check indicated that his driver’s license was under suspension, Griffin said. Officers, according to reports, observed a hand-rolled cigarette inside the passenger compartment of the vehicle, which contained suspected marijuana.
Cox refused officers’ request to search his vehicle. A narcotics canine searched the exterior of his vehicle and displayed a positive response to the odor of illegal narcotics inside the vehicle, Griffin said.
Officers searched the vehicle and recovered suspected marijuana and items of drug paraphernalia along with numerous pills and U.S. currency believed to have been obtained in illegal transactions, the assistant chief said.
Cox remained jailed this morning with no bail set.
Morgan City Assistant Chief Mark Griffin Jr. reported the following additional arrests:
—Wayne S. Hill, 55, of Morgan City at 3:39 a.m. Tuesday for appearing in public intoxicated and urinating in public.
Officers were dispatched to the area of La. 182 and Grizzaffi Street to investigate a man reported to be urinating in public view. Hill was located and found to be in an intoxicated condition. He was identified by witnesses. Hill was jailed.
—Nyjul Hillebrandt, 18, of Sixth Street in Morgan City at 4:15 p.m. Tuesday for probation violation.
Hillebrandt was arrested in the City Court building for probation violation and jailed.
—Morgan E. Stelly, 18, of Eighth Street in Morgan City at 4:03 p.m. Tuesday for theft of goods.
Officers were dispatched to a Victor II Boulevard pharmacy regarding a shoplifter. They were told that a female was observed concealing items in her pants in an attempt to commit a theft. Stelly was located inside the store and the items, valued at $19.99, were recovered. She was released after posting $492 bail.
—Christian A. Brown, 34, of Roderick Street in Morgan City at 10:27 p.m. Tuesday for attempted theft.
Officers were dispatched to a La. 182 convenience store where they learned Brown placed an item valued at $4.32 in his pocket and attempted to leave the premises. He was stopped by the store clerk, the item was recovered and the police called. Brown was located attempting to leave the premises and was arrested for the attempted theft. He was released after posting $492 bail.
St. Mary Parish Sheriff Mark Hebert reported the following area arrests:
—Charles Cantrell, 44, of the 100 block of Two Sisters Court in Bayou Vista at 2:11 p.m. Tuesday on a warrant for violation of a protective order.
A deputy located Cantrell at his residence. The warrant was obtained after the deputy assigned to the complaint determined that Cantrell made attempts to contact the female named in a protective order through text messages. No bail is set.
—Terry J. Kennerson, 25, of the 1200 block of Canal Road in Bayou Vista at 7:55 p.m. Tuesday on a warrant for failure to appear on the charge of criminal neglect of family.
A deputy responded to a complaint of a suspicious vehicle on Bridge Road in the Patterson area. Upon arrival, the deputy observed a truck blocking the roadway. The deputy located the owner of the truck, Kennerson, and learned of the active warrant. Bail is set at $3,606.86.
Berwick Police Chief James Richard reported no arrests.
Patterson Police Chief Patrick LaSalle reported no arrests.