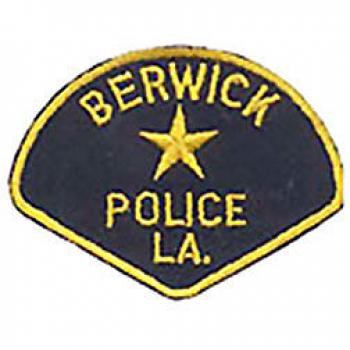 After pulling a gun and threatening to beat up his former boss, a Stephensville man was charged in Berwick, according to Berwick Police Chief James Richard.
Jimmy Martin III, 27, of Jamie Court in Stephensville was arrested at 11:50 a.m. Tuesday for aggravated assault with a firearm, a felony.
Richard said his department received a call around 9 a.m. from a Berwick company where Martin pulled a gun on the human resources manager.
Martin wanted paperwork from his termination, but it wasn’t ready. He threatened the manager, and after being escorted out, brandished a gun located in his truck.
Richard said Martin pointed the gun at the manager and threatened him.
Martin remained jailed this morning with no bail set.
Morgan City Assistant Chief Mark Griffin Jr. reported the following arrests:
—Alvarado M. Francisco, 42, of Montivideo, Maryland, was arrested at 2:37 p.m. Tuesday for no driver’s license and speeding 31 mph in a 15 mph zone.
A patrolling officer observed a speeding vehicle traveling through a school zone on Federal Avenue and confirmed the speed by radar. He was released after posting $488 bail.
—Joseph P. Percle, 27, of Thibodaux, was arrested at 8 p.m. Tuesday on a warrant for failure to pay a fine for domestic battery, St. Mary Parish Sheriff’s Office warrants for simple battery, simple assault, disturbing the peace and no license plate.
Percle, who was already incarcerated in the Morgan City Jail, was booked on several warrants.
—Curtis R. Robinson, 42, of Fourth Street in Morgan City, was arrested at 9:22 p.m. Tuesday on St. Mary Parish Sheriff’s Department warrants for failure to appear domestic abuse.
Robinson, incarcerated in the Morgan City Police jail facility, was booked on outstanding warrants for the St. Mary Parish Sheriff’s Department. He remains in jail.
St. Mary Parish Sheriff Mark Hebert reported responding to 36 complaints in the parish and reported the following arrests in east St. Mary Parish:
—Brennan Skinner, 22, of the 1000 block of Grace Street in Morgan City, was arrested at 10:23 a.m. Tuesday on a warrant for unauthorized use of an access card.
A deputy assigned to the Warrants Division located Skinner at the St. Mary Parish Courthouse in Franklin.
The warrant was obtained following an investigation into a complaint that a credit card had been used without the cardholder’s permission at a Bayou Vista store, Hebert said. The detective assigned to the case identified Skinner as the person seen on video surveillance using the victim’s card to purchase over $590 in merchandise. Skinner was jailed with no bail set.
—Monica Hebert, 26, of 100 block of Robicheaux Lane in Verdunville, was arrested at 11:13 a.m. Tuesday on a warrant from Lafourche Parish for theft. A deputy located Hebert at her residence on the warrant. Hebert was jailed with no bail set.
—Jonathan Ruffin, 27, of the 5200 block of North Bayou Black Drive in Gibson, was arrested on at 1:09 p.m. Tuesday on two warrants for failure to appear on the charges of criminal neglect of family.
A deputy assigned to the Warrants Division located Ruffin at the St. Mary Parish Courthouse in Franklin. Ruffin was jailed with bail set at $13,497.14.
—Jackie Naquin, 34, of the 6700 block of Grand Caillou Road in Dulac, was arrested at 9:19 p.m. Tuesday for resisting an officer by providing false information and on a warrant from Terrebonne Parish for failure to appear for probation hearing on the charge of resisting an officer.
A deputy assigned to patrol the Amelia area responded to a complaint of a disturbance at a residence on Lake Palourde Road. The deputy made contact with a woman who was visiting the residence, Hebert said. The woman repeatedly gave the deputy a false name, the sheriff said.
As the investigation progressed, the deputy identified the subject as Naquin, the sheriff said. Naquin admitted to giving a false name in an attempt to avoid arrest on an active warrant, Hebert said. Naquin was jailed with bail set at $4,000.
Patterson Police Chief Patrick LaSalle reported the following arrest:
—Vanessa Calais, 43, of the 1500 block of Live Oak Drive in Patterson for theft by shoplifting at the Dollar General in Patterson.
He was released on $337 bail.