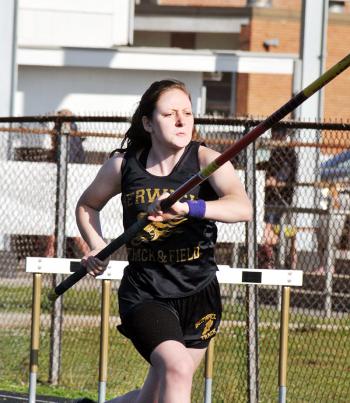 It’s going to help her grow up a little bit. I think it’s a pretty decent facility from what I’m understanding.
Berwick, La.
By GEOFF STOUTE gstoute@daily-review.com

Berwick High School senior Kennedy Sampey’s pole vaulting career began as a freshman after she was asked to take her sister’s spot following an injury.
Now, three years later and after a lot of work, she will be taking her pole vaulting talents to the next level as she has signed with Wartburg College in Waverly, Iowa, Tuesday at Berwick High School.
Sampey, who will close her high school career by competing at the Louisiana High School Athletic Association Class 3A meet Saturday, said she chose Wartburg College, a Division 3 school, after considering other schools that recruited her.
She said she first heard from Wartburg College after the Division 3 women’s track powerhouse contacted her through school and she responded to them and got in touch with their pole vaulting coach.
Sampey said the school has good facilities, and the coaches have been there awhile and are excited about teaching their athletes.
“Everything’s just really great up there,” she said.
During her freshman year, Sampey said she had planned to run track anyway but after her sister’s injury, Berwick Track and Field Coach Paul Gilder asked her to fill in for her.
That year at the district meet, she met Shane LeLeux, owner of New Heights Gym in New Iberia, and she began training with him during the summer at the facility, which provides pole vaulting and gymnastics training.
“Can’t find a harder working kid,” said LeLeux, a former collegiate pole vaulter at Southeastern Louisiana University. “She came in there. She bought into the system. She lifted the weights. She ran the runs, and she pole vaulted, did the gymnastics work.”
LeLeux, whose daughter Morgan LeLeux left the area after high school to attend the University of Georgia as a pole vaulter where she now is a junior and five-time All-American, said he thought Wartburg College would be a good fit for Kennedy.
“She’s going to be up north away from home,” he said. “It’s going to help her grow up a little bit. I think it’s a pretty decent facility from what I’m understanding. … In Division 3, she’s probably going in as the No. 1 jumper, jumping over 10-7, so it puts her right in line, right away for competition, which is going to be a plus for her.”
Sampey has a personal best of 10 feet, 7 inches in the pole vault.
Gilder said he is excited about Sampey being able to continue her pole vaulting career.
“She’s a hard worker. … She’s made herself a good pole vaulter. … I’m excited to see what she’ll do at the next level,” he said.
Sampey has qualified for the state indoor track and field meet three times, was the district runner up twice and won the district championship this year. She also qualified for state during her sophomore year.
She said she is excited about returning to state.
“I’m ready to go compete Saturday and do my best and just see what happens,” she said.