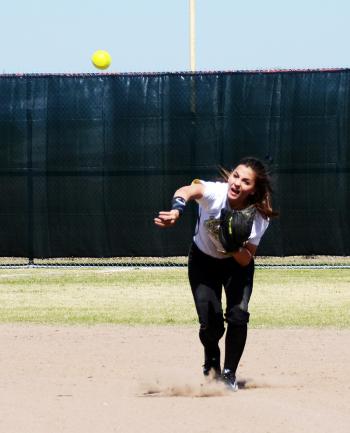 Berwick High School’s Rosalyn Gros throws to first base during earlier season action against Morgan City. Gros led Berwick with a 2-for-3 performance in the Lady Panthers 10-3 loss to Kaplan Wednesday in District 8-3A action in Berwick. (The Daily Review/Geoff Stoute)

Berwick suffered its first District 8-3A loss of the season, a 10-3 defeat to Kaplan in Berwick Wednesday.
Kaplan never trailed, scoring a run each in the second and fourth inning and two more in the fifth for a 4-0 advantage.
While Berwick countered with a run in the bottom of the fifth, Kaplan responded with six in the top of the sixth for a 10-1 lead.
Berwick scored two in the bottom of the sixth for the final margin.
Kaplan outhit Berwick, 12-5, while the Lady Panthers committed six errors in the loss.
Jordan Lipari, the first of five Berwick pitchers used, suffered the loss. In three innings, she surrendered two runs — one earned — on five hits with one walk and three strikeouts.
Offensively, Rosalyn Gros led Berwick with a 2-for-3 performance with a run, while Madison Carline was 1-for-3 with a double and two RBIs.
Berwick (6-7 overall, 2-1 in district) will return to action Tuesday when it travels to face New Iberia in a 3:30 p.m. contest.
MCHS run-rules Ellender
The Morgan City Lady Tigers run-ruled Ellender, 14-0, in five innings in District 7-4A action in Houma Wednesday.
Morgan City outhit Ellender 14-1 and benefitted from five errors by the home team. Morgan City had eight doubles as a team, led by Dwanna LeBeau’s 3-for-4 performance with three doubles, six RBIs, two runs and a stolen base.
Morgan City scored in every inning except the fourth, plating three runs in the first, four each in the second and third innings and three more in the top of the fifth.
Other top offensive contributors included Gracie Verrett, 3-for-4, two doubles, three RBIs and four runs; Kennedy Hebert, 3-for-4, two doubles, two RBIs and four runs; Scottie Metrejean, 2-for-4, two RBIs; and Mattie Rivere, 1-for-3, a double, two runs and a stolen base.
On the mound, Hebert tossed a complete-game one-hitter. In five innings, she struck out six.
Morgan City (8-4, 3-0) will return to action today when it travels to face Vandebilt Catholic in a 4 p.m. contest in Houma.
Central Catholic routs Centerville, 13-1
Central Catholic defeated Centerville, 13-1, in five innings in District 7-4A action on the road Wednesday.
Central Catholic jumped out to a 6-1 lead after an inning and added four runs in the second, two more in the third and another in the fourth for the final margin.
Offensively, Central Catholic collected 14 hits led by Hallie Autin’s 3-for-3 performance with a triple, a home run, four RBIs and two runs. The junior was a double shy of hitting for the cycle.
Other top offensive contributors included Emma Aucoin, 3-for-4, a stolen base and two runs; Brooke Lipari, 2-for-2, a triple, an RBI and two runs; Taylor Picou, 2-for-4, two RBIs and two runs; and Cameron McDaniel, 1-for-2, a double, two RBIs and a run.
Sarah Thomas earned the win. In five innings, she surrendered one earned run on three hits with one walk and fanned three.
Central Catholic (7-6, 4-1) will return to action today when it hosts Hanson in a 5 p.m. contest in Bayou Vista.
Kaplan defeats Patterson
Kaplan run-ruled Patterson, 15-0, in four innings in District 8-3A action at Patterson Wednesday.
Cayla Wiggins led Patterson with a single.
Patterson (3-7, 2-3) will return to action today when it travels to face E.D. White in a District 8-3A contest set for a 4 p.m. start.