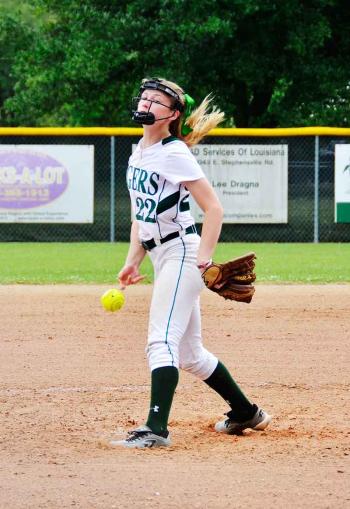 Morgan City High School shutout Plaquemine, 9-0, in the Lady Tigers home opener Monday. Sophomore pitcher Kennedy Hebert, above during action last season, tossed a two-hitter with 15 strikeouts in the victory. She also led the offense with a 2-for-3 performance with a home run and three RBIs. (The Daily Review/Geoff Stoute)

Morgan City’s Kennedy Hebert tossed a complete-game two-hit shutout with 15 strikeouts as Morgan City routed Plaquemine, 9-0, in Morgan City Monday.
Morgan City took a 3-0 lead after the first and scored two runs apiece in the third, fifth and sixth innings.
As a team, the Tigers collected 10 hits.
Hebert helped herself at the plate with a 2-for-3 performance with a home run, three RBIs and two runs. Other top offensive contributors included Scottie Metrejean, 2-for-4, two RBIs; Dwanna LeBeau, 1-for-4, a triple, an RBI and a run; Gracie Verrett, 1-for-2, an RBI, a stolen base and two runs; Nia Lightfoot, 1-for-2, an RBI; and Hallie Blanchard, 1-for-4, a double and a run.
Morgan City (4-1) will return to action Friday when it begins play in Berwick’s Lady Panther Classic with a 3 p.m. contest against Kaplan. Kaplan was the Class 3A state runner-up a year ago.
Berwick run-rules
H.L. Bourgeois
The Berwick Lady Panthers run-ruled H.L. Bourgeois, 13-2, in five innings Monday in Berwick.
While H.L. Bourgeois took a 1-0 lead after the first inning, Berwick responded with three in the bottom of the frame.
H.L. Bourgeois added another run in the second before Berwick pulled away with five runs for an 8-2 lead.
Berwick added four more runs in the third and one more in the fourth for a 13-2 advantage.
Berwick had 13 hits in the contest led by Madelyn Gros’ 3-for-3 performance with two doubles, a home run, four RBIs and two runs. Sydney Aucoin also homered as she finished 2-for-3 with two RBIs and a run. Other top contributors included Jaci Arnold, 2-for-4, a double, two RBIs and two runs; Emma Hover, 2-for-2, an RBI and two runs; Madison Carline, 2-for-2, a double and two runs; Madeleine Hover, 1-for-3, three RBIs; Jordan Lipari, 1-for-3, an RBI and two runs; and Rosalyn Gros, an RBI.
Jordan Lipari earned the win for Berwick. In four innings, she surrendered an earned run on four hits with one strikeout.
Berwick (2-1) will return to action today when it travels to face Plaquemine in a 4 p.m. contest.