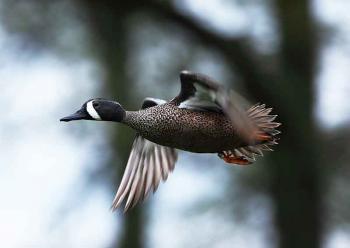 Blue-winged teal are intercontinental travelers that could provide answers to virus dispersal.

From a well-hidden pop-up blind next to ours, Paul Link, North American Waterfowl Management Plan coordinator for the Louisiana Department of Wildlife and Fisheries, counted down, “three, two, one…”.

Suddenly, the tranquil silence and orange glow of the predawn sunrise near Krotz Springs erupted with the report and flash of a rocket propelled net thrust over an agricultural field crawfish pond. The echo of the explosion had barely settled when teams of biologists, technicians and volunteers burst from the blinds and rushed down the pond levees carrying cumbersome crates to clear the net of its contents.

In chaotic panic, nearly 400 ducks and coots splashed beneath the trap, with the vast majority blue winged teal, the targeted species.

Reminiscent of a squad of first responders on a rescue mission, the biologists worked feverishly to recover the hapless waterfowl as quickly as possible. And though this was a preplanned ambush on the agricultural wetland, each and every passing second was critical. Any further undue stress could lead to injury or worse, mortality.

This past month, representatives from the University of Georgia, Stephen F. Austin, the U.S. Geological Survey Alaskan Science Center and the Louisiana Department of Wildlife and Fisheries have been capturing and banding blue-winged teal for study to determine the intercontinental dispersal of infectious agents, mainly viruses and parasites.

Why blue-winged teal? Andrew Ramey with the USGS Alaskan Science Center says to mirror and expand previous virus and parasite study work done on other waterfowl in other parts of the country.

Ramey said, “In the past, we’ve studied the dispersal of viruses and parasites of long-distance migrants such as northern pintail ducks. And as a result, we’ve been able to determine that there is evidence that pintails are dispersing viruses and parasites between East Asia and North America.

“In this project, we’ve that sort of modeling to see if we could move that into a different part of North America,” Ramey said. “Specifically, we’re looking at blue-winged teal to see if they are bringing viruses and parasites with them from the northern neotropics — those countries and regions being Mexico, Central America and South American countries like Columbia and Venezuela. We’re focusing on blue-winged teal because they migrate farther south and they have the most widespread winter distribution in the neotropics as compared to any other waterfowl species.”

The impact of viruses entering the United States became critically apparent during the spring of 2015 when the price of eggs and chicken skyrocketed. Some 49 million poultry, consisting of mostly chickens, but also turkey populations had to be euthanized as a result of avian influenza, or bird flu, at a cost of more than $1 billion.

Following capture, the blue-winged teal immediately were banded before the indignities of trachea (throat) and cloaca (posterior opening) swab samples were taken from each bird. After swabbing, blood samples were extracted.

In describing the process and reason for the team’s meticulous handling of specimens, Ramsey said, “We take the individual swabs and place them in the same test tube to increase our odds of detecting a virus. Then we take blood samples and actually spin them down for serum. In the serum, we’re hoping to maybe find antibodies to influenza viruses. Through the sampling and testing, it will tell us if the birds have viruses now or if they previously were exposed to viruses.”

One 2014 USGS abstract points out the consistent isolation of H7 subtype Influenza A Viruses (IAV) during the spring provides evidence that H7 viruses may be relatively abundant in blue-winged teal. What’s more? The finding may be important to both public and domestic animal health. It went on to say, at the time, H7 viruses caused human diseases as well as poultry outbreaks of highly pathogenic IAV in Mexico and low pathogenic IAV in the United States.

However, human infections with bird flu viruses can happen when enough virus gets into a person’s eye, nose or mouth or is inhaled.

Yet, the spread of avian influenza A viruses from one ill person to another has been reported rarely and has been limited, inefficient and not sustained.

The CDC reports says because of the possibility that avian influenza A viruses could change and gain the ability to spread easily between people, monitoring for human infection and person-to-person transmission is extremely important for public health.

Ramsey said, “It’s complicated. You hear the word, ‘bird flu’ all the time, but that’s a rather broad umbrella. There are a lot of nuances and specific details under that umbrella. And that’s the type of information we’re trying to gather. But, it’s this sort of information that can be used to improve bio-security for the poultry industry, and we can access the risk of foreign origin of viral threats in the U.S.”

Link says he has banded nearly 125,000 birds during his career, with more than half in Louisiana. He estimates he’s deployed his rocket net more than 1,400 times.

With every shot, there are risks and associated costs.

“It takes about 50 bags of corn per site per week plus the cost of equipment, data storage and processing, call center contracts, websites, etc., to band these birds. I’m very thankful to go out together with such a great group of volunteers. I take pride knowing we cleared a net of 400-plus ducks and coots in 8 minutes with no injuries or mortalities,” Link said.

Hunters sporting prized duck bands on their call lanyards equate them to conservation efforts that determine harvest rates, mortality and migration routes of a particular species.

And that is true. But, the next time they recover a blue-winged teal band, they might think again. It just might be for public health.

EDITOR’S NOTE: Flores is The Daily Review’s Outdoor Writer. If you wish to make a comment or have an anecdote, recipe or story to share, you can contact Flores at 985-395-5586 or at gowiththeflo@cox.net or visit his Facebook page, Gowiththeflo Outdoors.