Rader holds on to win Co-Angler of the Year award 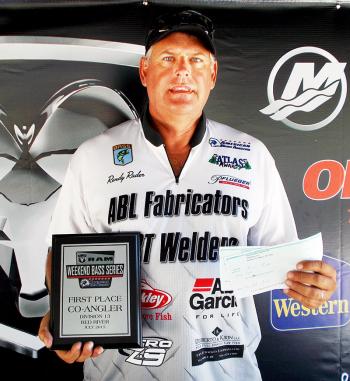 When Morgan City resident and tournament bass angler Randy Radar had nothing to weigh in Sunday afternoon at the American Bass Anglers Association Louisiana Division Championship at Toledo Bend, he didn’t think he had a chance of winning.
Fishing the ABA Weekend Angler Tour as a co-angler this year, his three-fish limit Saturday weighed 7.96 pounds, enough to place him at the top of the leader board after the event’s first day.
Radar caught his fish in 6 inches to 5 feet of water using soft plastics on the edges of hay-grass.
But, on Sunday morning, Radar drew a boater who preferred to fish deep water, something he admits he is not good at.
There are disadvantages of being a co-angler when it comes to tournament bass fishing, Radar says. For one, you have no way of knowing who you will be paired with, as names are drawn randomly. It’s possible to draw an angler who not only isn’t familiar with the waters you’re fishing but also didn’t put the time in scouting prior to the tournament.
Radar, who has fished the ABA circuit since 2004 as both a boater and co-angler, said, “I didn’t fish as a boater this year because I didn’t have time to go scout. But, if you’ve got a guy who’s put in the time to scout and he’s got a game plan come Friday night, when you blast off Saturday morning he knows exactly what he’s going to do. So, you have an advantage over the other co-anglers. But, you never know who you are going to draw for a boat-er.”
Other challenges co-anglers have to overcome are being in the back of the boat, where more often than not, you’re not going to get to cast in the sweet spots. Radar says what you’re going to get is used water, where the guy in front gets to hit everything first like stumps and other structures bass like to hang around. In short, the co-angler is fishing for scraps.
“I’ve got boater experience,” Radar said. “A lot of guys getting in as co-anglers are just wanting to learn. Basically, they just watch and don’t really take ad-vantage of certain situations. What I do is try to watch what the boater is doing and see if they miss a spot.
“For example, when fishing a stump, I try to throw something different than the boater. If he is fishing with something and not getting a bite, maybe I can throw something and catch. Now if he catches, then I’ll try and throw what he is throwing. If he is not catching on that stump and moves off, I’ll try and throw at the back of that stump. I’ve taken advantage of that situation. You don’t ever throw just once at a stump. Always throw multiple times when you can,” Radar said.
Other co-angler disadvantages include equipment. Radar pointed out that when you have your own boat, it’s packed with just about everything you need.
However, as a co-angler, you pretty much have to bring just one tackle box and a few poles. There are situations, the angler says, where the boater may be fishing a senko, where you don’t have one in your box. What’s more, though, while anglers are friendly with one another, it’s still competition.
Radar said, “I’ve fished this particular circuit for quite some time. You get to know a lot of the guys fishing. It’s one of those things. You’re friends on the bank, but as soon as you put the boat in the water, it’s game on. But, it’s all good fun, especially at the weigh-in.”
When Radar entered the championship event, he was seven points behind in second place for the division co-angler of the year award. He had a shot at winning it outright but needed a good finish to win.
As luck would have it, at the weigh-in, none of the co-angler leaders fished well. Radar’s first day 7.96-pound, three-fish catch was enough to win the tournament by a half pound. It was his second co-angler tournament win this year and gave him enough points to also win co-angler of the year.
Radar’s win also punched his ticket to the ABA Week-end National Championship Tournament in April 2016 on Lake Hartwell in South Carolina.
If you wish to make a comment or have an anecdote, recipe or story you wish to share, you can contact John K. Flores at 985-395-5586, gowiththeflo@cox.net, or on Facebook at gowiththeflo outdoors.
EDITOR'S NOTE: John K. Flores is The Daily Review's Outdoor Writer.