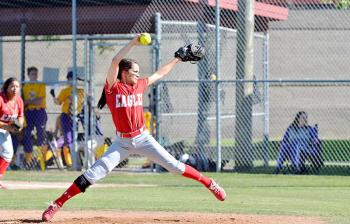 Central Catholic pitching ace Megan Landry threw a one-hitter in the team’s 15-0 playoff win against Logansport on Tuesday. Landry only allowed one hit and one walk in the four-inning game. The Lady Eagles advance to the second round on Thursday playing host to False River at 3 p.m.
--The Daily Review/Corwin Murray

BAYOU VISTA — Central Catholic simply overpowered Logansport 15-0 behind pitching ace Megan Landry.
Landry struck out nine of the first 10 batters she faced in a one-hitter and Brittany Longman ended the game with a towering home run during first-round playoff action Tuesday.
Landry finished with 11 strikeouts, allowing just one hit and a walk.
“Megan has been strong for us all year and she shined again tonight,” Central Catholic coach Joe Russo said. “She moved the ball around the plate well and she changed speeds well. I can’t ask for any more from Megan, she gives a 100 every time.”
CCHS (22-3) jumped out to a 3-0 lead in the first inning and extended the lead to 9-0 in the third inning behind big hits from Brooke Lipari and Landry.
The Lady Eagles put the game away in the fourth inning when Kaitlyn Gros and Jordan Morvant singled to open the inning before Lipari doubled to score both base runners and push the lead to 10-0.
“We cranked out 12 hits and I normally tell them that if they give me 10 hits we’ll win most of our ball games,” Russo said.
Leading 13-0 with two out and a runner on, Longman tagged a pitch over the left-centerfield fence to end the game in the fourth inning.
The leading hitters for Central Catholic were Landry, 3-for-3 with two singles, a double and two RBIs, while Kaitlyn Gros was 3-for-3 with two RBIs and two runs. Lipari was 3-for-4 with a double, two RBIs and four runs; Taylor Picou, 1-for-2 with an RBI and two runs; Longman, a home run, two RBIs and two runs; and Kelly Russo and Halley Autin, each with a stolen base.
“We really worked hard on hitting,” the longtime coach said. “On those rainy days we were in the gym hitting balls.”
Central Catholic advances to the second round Thursday hosting False River (9-11) at 3 p.m.
“I have scouted False River and I feel if we continue to play like today then we should be in good shape,” Russo said.
Parkview Baptist 9, Patterson 1
Patterson’s season ended with a first-round playoff loss to Baton Rouge powerhouse Parkview Baptist Tuesday on the road.
The Lumberjacks finished the season 9-15.
The leading hitters for Patterson High School were Tapanga Haven, 1-for-4 with a single; Gaylen Grogan 2-for-3 with two singles; Ashlynn Rock, 1-for-3 with a single; and Emmeli Smith, 2-for-3 with two singles.
Also hitting for Patterson were Cayla Wiggins, 1-for-3 with a single; Taylor Hall, 2-for-3 with two singles; Casie Boudreaux, a sacrifice and an RBI; Hailey Sehon, a walk; and Ashley Bonilla, a run.
Hall suffered the loss in the circle for Patterson.
--By CORWIN MURRAY